December 23, 2012
With the Pioneer Park membership burning a hole in my pocket, the kids and I decided to go back very soon.  Two weeks later, we went back.  We decided to make a day of it.  First we went to the Aviary, looked at all the birds, and then went back to This Is The Place.

Much to our dismay, all of the fun things from our previous visit were gone.  It was too cold for the animals to be out, and not many people worked there in the off season.  We were very disappointed, but happened to be talking with the public affairs rep, and she told us about the Christkindle Market.  It is a traditional German market which sells the cutest things ever.  To start off the Market, they were going to have a children's Light Parade.  It is a parade where all the children carry a lantern and go through the streets of the towns in Germany to start off the season.  What a beautiful idea!  My children were invited to participate and we were all so excited. 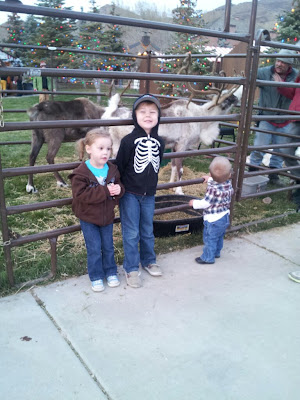 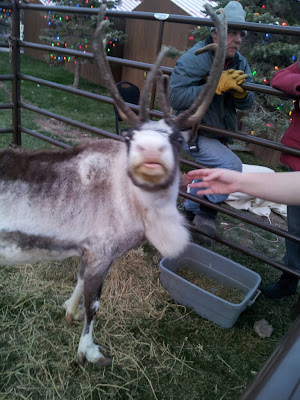 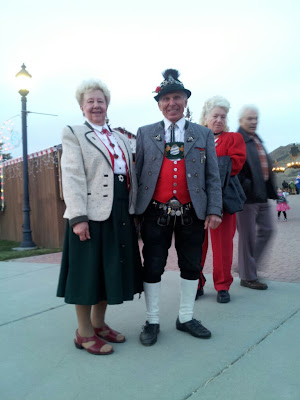 The day of the parade came, and we headed off.  When we got to the Park, I realized I had left my purse home.  I turned around, and we went all the way back home, and then drove all the way there again.  It was a lot of sitting in the car.  Good thing for books on tape!  When we finally got there, it was beautiful.  All the little shops set up, the Christmas lights, and the reindeer were all so magical.  We browsed the shops for a bit, I bought the kids a brautwurst and looked for lebkuchen which no one was selling, and then it was time for the parade.

A little boy looked at us sitting in our pew waiting for it all to start, clutching our little lanterns, and looking very out of place.

"What are you doing here?" he demanded in a bossy sort of voice.

"We are going to be in the parade!" I told him.

"You can't.  You weren't there for any of the practices." he informed us.

Keith began to look a little worried, so I hurried to reassure him, and the boy.

"It is fine.  We can still participate,  It will be alright." I responded while giving Keith a little squeeze.  Faye was oblivious to the whole thing, of course.

Again, I argued with the little boy.

Have you ever argued with a bossy little stranger boy?  It was quite entertaining, I assure you.

"Mom, can we still be in the parade?" Keith asked, his blue eyes and little forehead filled with worry.

"Of course we can silly!"  I told him.  We sat for a little while longer watching the kids wiggle and squirm all around us.  We heard the announcement that we would be starting in 5 minutes, and then Faye made an announcement of her own.

"I have to go potty, Mommy."  She said, doing the potty squirm.

I sighed and asked her if she could wait.

I grabbed hold of both kids hands, and began to swim upstream.  There was a crowd of parents and children trying to come into the building, trying to find their kid, their teacher, their seat, their lantern, etc.  We were the only ones trying to go outside.  It was difficult, but finally, we made it.  We hurried to the bathroom, and then hurried back.

While we had been in the stuffy building with the clamouring kids all around, I had worried how I would find the kids in the end.  It was a kids only parade, and no adults were to be in it.  When we made it back from the bathroom, I saw a line of parents and kids lined up waiting for the parade.  These were people like us, not in a class, just wanting to join in the fun of the parade.  I decided we would join that group of people rather than going with the kids in the building. 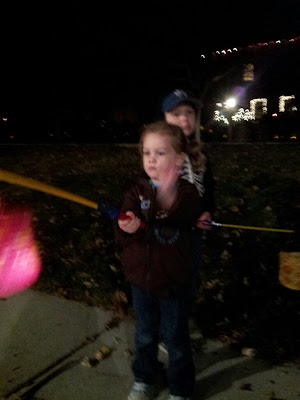 Keith DID NOT like that idea.  He made it very clear he didn't like that idea.  He stood and cried and moved away from us and insisted he would not take part if we were not with the kids in the building.  I tried to explain to him that this way I could be with him and he wouldn't be lost at the end of it, but he refused to listen and just cried.  Finally, I saw the school kids leave and we joined the que behind them and Keith was happy again.  I think he thought we wouldn't get to be a part of the parade, and that we would just have to stand there and watch it, which is why he threw a fit.  That and the fact that he was tired.

I threatened to take us home so many times before he finally came.  I don't deal with fits when we are in public.

Finally, when the parade ended (which was very boring in actuality) we headed home.  We were cold, and tired and ready for the evening to be done.  Keith had been shivering for the past hour and a half and quite frankly was miserable.  He solemnly informed me he never wanted to be part of another parade again!  I had to laugh.  In truth, it wasn't a very good experience for him.  Maybe another time when we are more informed. 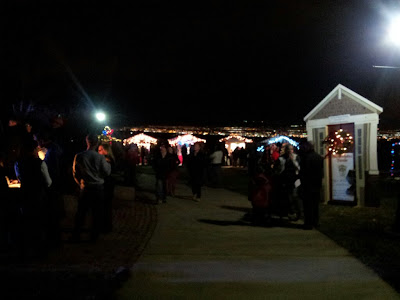 I plopped them into their chairs and we headed home.  Before we got on the freeway, the kids were asleep.

I hear that is what happens to all parade participants.
Creating Memories Keith

You just make my heart feel Merry and Bright!

Love your story and your pictures!

Hope the rest of the year and 2013 is filled with joy!