December 11, 2012
Every year I try to play along with the Extravaganza in hopes I will win.  I have yet to win.  Fingers crossed for a win this year. 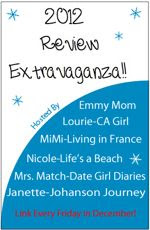 Looking back, I realize this has been a big year!  Much has happened.  To begin with, Jeffrey and I celebrated 5 years of marriage.  We tried to go dancing for our anniversary, but it didn't work out.  I was misinformed.  We played Karoke instead.  I may be in love with it now.

This is the year we joined the 21st Century.  Smart phones!  Though now, after much research, I think I will be getting rid of my cell when my contract expires.  Not such a fan of cell phones anymore.

I was blessed to get a week watching my brother's kids.  It was glorious.  5 kids, who were happy, and had so much fun together, thrilled me.  It made me want 5 kids.  While we were there, Keith contracted pneumonia.  It was the most interesting thing for me to watch.  When the bigger kids were in school, Keith was lethargic, mopey, and sick.  The moment the kids were home, Keith acted completely normal.  Happy, energetic, playful.  It made me laugh.  The boy is so much like myself.  Luckily we caught it early on and he was treated and over it in a matter of days.  Talk about a blessing and a half.

The beginning of the year my headaches became dire.  They lasted for a long time, and were frequent.  I went on a quest to find a cure.  Sleep, yoga, sugar, etc.  Finally, I discovered that exercise helped alleviate the pain.  Since then, I have used that as my cure.  Hallelujah!  Exercise is the cure-all.  Love it.

In March my brother asked me to help him with a project he was working on.  He was so stressed out, and I gladly helped.  He was sewing a flag.  Two orange circles, entertwined.  It was a very important flag.  One that he used with which to propose to his girlfriend!  The happy news is she said yes.  I was so excited for her to be my sister.  I simply adore her.

I also got a few root canals.  Not fun.  But I love my dentist.  I drive 40 miles just to see him, he is that great.  I have had bad experience with dentists in the past, and a good dentist is irreplaceable.

Really, it was a busy beginning to a busy year.

Nicole said…
Sounds like you did have a busy start to the year. Congrats on 5 years, sounds like you're getting ready to hit 6 whoot whoot!
December 12, 2012 at 8:13 AM

Susan Anderson said…
You really did have a lot going on this year...

I always want to do this challenge myself, but I never have time because I get so busy at Christmas. And it's even more so with Dave home all the time now.

Ah well, I'll enjoy reading all the rest of your entries. Good luck!

Emmy said…
So agree about a good dentist being irreplaceable! I too have had many bad experiences. I want to to know more About how your brother proposed! Sounds interesting involving a flag and all. So glad you figured out a cure for your headaches. And is that the karaoke place we tried to go to?
Sorry I am finally now just reading this. So glad you are recapping and fingers crossed for you!
December 13, 2012 at 3:42 PM

Randomlicious Memoirs said…
What! No Cell phones! What about in an emergency?? :)

I am going private on my blog and wanted to invite you as a reader, but I need your e-mail. If you could let me know that would be great! Thanks! Hope you and the family are doing well and having a merry Christmas!
December 17, 2012 at 6:27 PM