Breakfast and a Food Fight

October 03, 2012
I am a big advocate for having a healthy breakfast.  Growing up, I was fortunate to have a very early rising father and a late to bed mother.  It worked out perfectly.  My mom would stay up very late making sure the house was clean, and my dad would get up early and make breakfast for us, letting her sleep in.

Every morning we would have what we called wheat mush.  I am guessing it was something along the lines of cracked wheat?  My dad would take wheat berries, stick it in the blender, crack it, and then cook it.  I fondly remember the cold mornings of winter time, waking up to the sound of the blender, and getting up to the smell of a hot breakfast.  Sometimes we would have cream of wheat or oatmeal, but mostly it was wheat mush.  The dark silent house, the hum of the heater, Jack Frost's artwork on my window, and my dad's wheat mush made those early mornings so wonderful.  Getting ready for school wasn't such a chore.

When I was in school, I remember a science teacher actually did an experiment, and took the chemical makeup of cardboard, and found that cold cereal and cardboard had the same nutritional value.  Lesson learned?  If very hungry, eat cardboard. There is nutritious value to it, and it may save your life.

That said, I have carried on the tradition of rising early to serve my children a hot breakfast as I believe it will fill their tummies longer than cold cereal, and it will help them in the long run.  More iron, more vitamins, etc.  However, there are two times a year my children get cold cereal.  Halloween and St. Patrick's Day.

The kids look forward to it every year, and I have to admit, so do I. 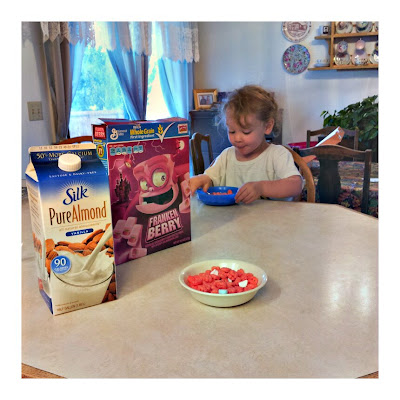 Today I got to go to school with Keith.  He was adorable!  He sat on my lap, and hugged me nearly the whole time.  I loved it.  But when it was time to split up and go play at the centers, he had a hard time.  A boy wanted to play with him, and he was being a stink pot.  I have been told before that he has a hard time socially, and that he is doing better, but man alive, I couldn't believe how rude my boy was being!  We had to have a talk.

It turns out, when I left, he was back to his sweet self, and he was just doing it all for my benefit.  But it did get me thinking.  We are seriously debating pulling him out of his school and finding a new one for him.  He is academically more advanced than anyone else in his class, but he needs the social practice.  Decisions, decisions.

I decided to not mention it to him when I picked it up.  Just move on and forget it.

We ran a bunch of errands.  I learned that in the past three months, Keith has grown three inches.  We had to buy him a bunch of new pants.  He is so excited!  He didn't know that pants should at least touch the shoe, if not cover it a bit.  All of his pants were nearly above the sock.  Of course, it was adorable to see, but had to be remedied.

When we finished, I decided to try an experiment.  I would have dinner ready and we would eat around 5, then get them ready for bed.  When Jeffrey got home from work they would be ready to play, and then could go to bed by 7:30.  Keith has been so tired lately, which may be contributing to his hard times in school.

That was my plan, anyway.

I made dinner, and then asked Keith to help me make some cookies. 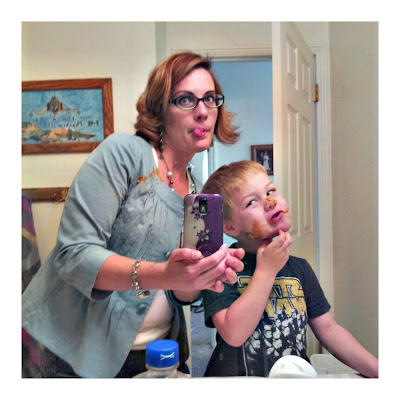 We had a lot of fun. 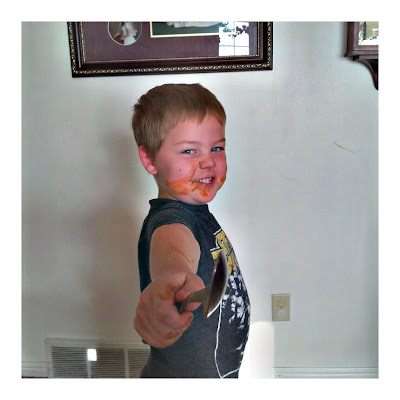 A little too much fun. 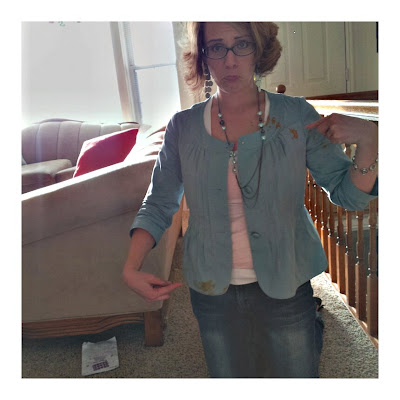 Not sure how the food fight started, but we laughed a lot, and I am so glad we did it. 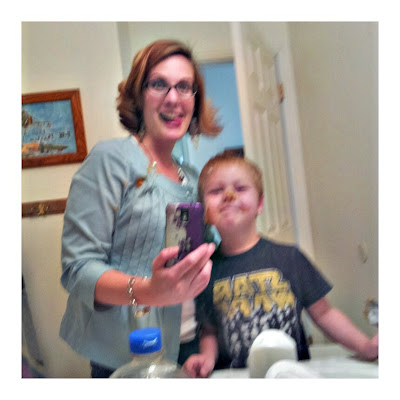 I was so happy that I could help Keith have such a positive memory/experience with me after such a hard day at school.

As for my plan, dinner worked, getting ready for bed worked, Jeffrey came home... and cousins came over.  I had to finish up my errands, so left Jeffrey in charge.  I got home around 8:30, and the kids didn't get in bed until 9:30 again.  Sigh.  Maybe I can try again tomorrow.

It is a work in progress, right?

Noodle said…
Preschool choices are hard... Sammy is our neighborhood preschool group and is way ahead of the other kids... But she is such a social child that she needs more than I can give her at home... Soo she goes for the social aspect and at least it reafrims what she all ready knows kinda like a working review... I thought about doing a more advanced preschool but It wasn't in the budget (neighborhood preschool is free!) So on no preschool days we work on her reading and math =)
October 4, 2012 at 8:09 AM

Emmy said…
What a fun memory and how fun to have a food fight- everyone should be in one at least once in their lives.

And I am so impressed you make a warm breakfast every morning-- I totally do not. I should do it more often though.

With my kids I definitely had them in preschool for the social, getting used to be away listening to a teacher aspect than academic.
October 4, 2012 at 2:24 PM

Crystal Collier said…
I know what you mean about tough decisions with education. By the time we were in a place where I could put Quin in a public school he was so advanced that I couldn't bring myself to do it. He's on target to graduate High School between 14 and 16, and why would I take that away from him? Have you thought about pulling Keith out for a little bit, getting him a full grade level advanced, then having him tested and placed in the next grade up?
October 8, 2012 at 12:48 PM