October 13, 2012
Keith's birthday is on Tuesday.  He has been making the most hilarious birthday list ever.  I love it.  So full of hope and magic of childhood.

I had to laugh when he made this list.  He insisted I write everything down.  I thought for a while about the sleepover with the bird.  It would never work here.  The dog would worry the bird to death!  I called my mother and asked if he could spend the night at her house for his birthday.  She agreed, and Keith excitedly went off to begin his sleepover.

Faye was a little sad to be left out, so she and I made great plans to have a girl's night.  We were invited to attend the movie with Keith and my parents, but decided to just begin our GNO early.

Because a Mommy/Daughter GNO is too much fun to waste at a movie.

We dropped Keith off laden down with treats and excitement and sleepover jitters.

The rain had been spitteling around for a while.  You know, like when you sneeze and get a little spittle on your arm from covering your mouth.  Just a little, not anything, really.  As we got close to my parents house, it began to rain in earnest.  The good kind with the splattering gushing beating down that drenches you after a few moments outside.  The kind that instinctually makes you want to hurry out of it, and at the same time linger, relishing the mad pounding down completely emersed while walking on "dry" ground sort of feeling.   Can you believe, that is my favorite kind of rain.  The real rain, not the pretend kind.  When we arrived, the three of us, Keith, Faye, and I , jumped out of the van and danced up to the door, enjoying the downpour.

When we walked in the house, Faye yelled "Mom?!" just like she always does.  She makes me laugh.  Never knowing where my mother was when I would get there, as I walked in the door, I used to yell "Mom?" to find out where she was.  Faye picked up the habit, and it cracks me up.

We left Keith dancing with excitement, and hurried out to the van to officially begin our GNO with some Halloween oreos.  I love that Faye's whole face somehow turns black when she eats oreos.

Our GNO began with a quest for two belts and a pair of boots.  Faye has the most darling shirt, which hangs like a bag on her.  It is too wide for her little frame.  If I can just find one of those cute elastic belts that go around the natural waist to cinch it in, it would completely complete her outfit.  But wouldn't you know it, no one carries those for a 2 year old.  Rude!

Without that knowledge, we drove to the mall, parked far away, and walked around to the strip malls, and then the actual mall.  Aiming for every single puddle we could find, and taking great delight in the splashes we could make with our boots.  We were boot twins today.  At Faye's request.  She dressed me because I dress her every day.  That is what she told me.  We shrieked with laughter when people gave us funny looks, driving around in their cozy cars with the heater on and missing the sheer joy of spattering the water high up around us, creating a second downpour to accompany the one from the skies.  They don't know what they were missing.  We saw some people rushing to their cars, but pausing to watch and smile as Faye let out a particularly emphatic laugh as the water dolloped her pants and jacket.  After an hour and a half of splashing and ducking in and out of stores in search of a little belt, we decided to call it quits.  We were tired and just wanted to get to the pampering of the night.

We ate some soul warming butternut squash to warm up our souls and fill our bellies.  Faye told me that it made her throat and belly warm to eat the soup.  She insisted she eat hers with a straw.  Butternut squash and fresh hot french bread with butter.  That is one of my favorite meals ever; especially when the it is made right, with just the right amount of nutmeg in it.  And then, more oreos, nerds, and to top it off, we had some of Stephen's Pumpkin Cider, or Pumpkin juice, as we like to call it. 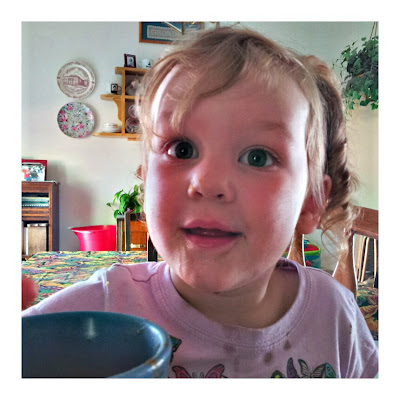 That is the epitome of fall flavor, I think. Hot, steamy, and puts me in a dreamy mood as it warms me to the toes.  Love!

When our bellies were full and we had warmed up, I helped Faye get into the shower, put her towel in the dryer so it would be toasty warm when she was ready to get out, and got my room ready for the rest of the night's activities.  Pampering to the Queen's degree.  At least that is what Faye thought.  She was more spoiled and pampered than she has ever been before. 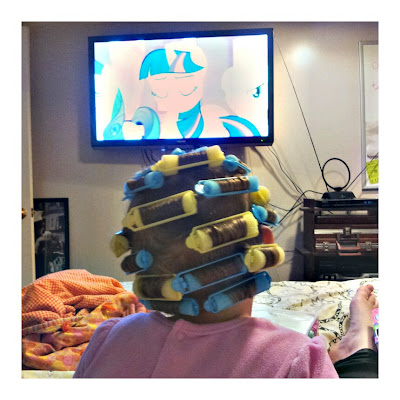 I know her hair is already curly, I just wanted to see how it would turn out.  And she felt so pretty getting her hair fixed up. 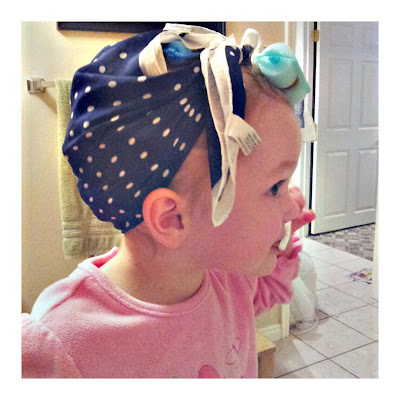 Looking like a mini Rosie the Riviter she got to wear a scarf to bed to sleep on the rollers.  We painted her nails a pretty pink color that she picked out herself.  She was so proud! 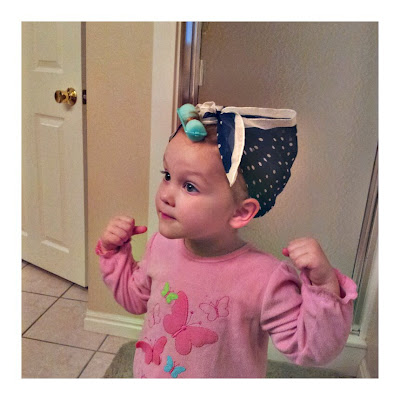 Once her hair was up in rollers, she took the rest of the rollers, and tried to put them in my hair.  After two, she declared my hair was done.  It was too curly for the curlers.  We painted my nails a pretty peacock copper color and then snuggled as they dried.

The whole day, Faye was so kissy.  I love that she is in a kissy stage right now.  She holds my hand and then randomly will kiss it.  Or my arm.  Or leg.  Whatever is closest to her mouth, she will lean over and kiss me.  It makes my day.  Especially when she does it as we are cuddling.  Lots and lots of kisses on my arm and hand tonight made me so happy.  Her lovey moods just melt me.

I love that we can spend so much time together (from 3:30 until... ahem... 9:30) and not be tired of one another's company.  I love that she didn't want to go to bed because that would end our GNO, but she did it anyway because she knows how her body needs the sleep.  I love the memories we made together today, and hope that we can make so many more.

Sometimes that little connection can mean so much.  I very nearly didn't have this time with her.  I had made other plans for the night.  Twice over.  But both fell through, and I am so glad they did.  I wouldn't trade all that puddle stomping for anything! 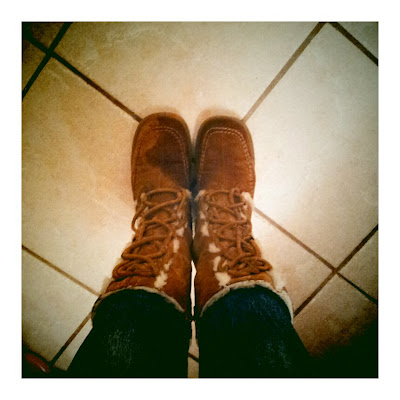 And I cracked up at the shell entry on Keith's list!!