They spend hours on end drawing and coloring and painting, and molding playdough, etc.  Most children are through after an hour or so.  Give my kids some blank paper and something to make marks with, and they are in happy land!

Which is wonderful, most of the time.

Lately, though, not so much.

Sunday I was sick in bed all day.

Evidently the kids had gotten up early (like 5:00 am, early) and helped themselves to some whipping cream in one of those lovely spray cans.  Like the cheeze whiz, only whipping cream whiz.  And they thought the furniture was a little plain, so painted the living room with said whipping whiz.

Jeffrey cleaned them and the living room up and got them some breakfast when he learned about the fiasco.

Half an hour later, he was angry with Keith, again.

The boy had written all over his great grandmother's dining room chairs.  And not just written on them, but pressed so hard against the wood, he carved into them.

Yesterday he was supposed to be napping.  So was Faye.  She came out of their room and told me Keith was drawing on the carpet and on himself.

I wasn't sure how to react.  On the one hand, I don't want to encourage tattel-telling.  On the other hand, he was doing something he really shouldn't have been doing and it needed to be stopped right then.

I marched the boy upstairs, had him tell his grandmother what he had done to her carpet, and then put him at her mercy with a list of chores he needed to do.

I thought that would be the end of it.

Remember the tattle-tell?  If only she had learned something from watching her brother's punishment when she told on him.

Today, when she was supposed to be napping (why does everything happen during nap time?!) she found a pen and proceeded to draw all over her arms and sheets.  The sheets I had just pulled out of the dryer and lovingly spread on their beds while deeply inhaling that wonderful freshly washed scent. 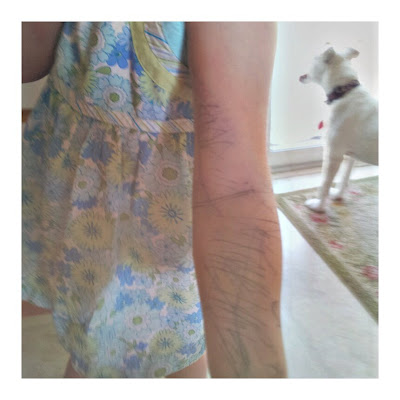 The girl has already been banned from all markers until she is older, it is looking like a pen ban will soon go into effect as well. 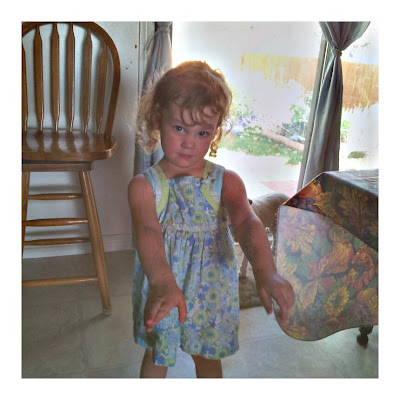 Now the conundrum.  Do I squash the budding artist in order to save my mother in law's house?  Or do I permit them to continue with their creative outlet and me apologize and make restitution in one way or another, every single day?

It isn't like they are at a loss for paper or art surfaces to decorate!  They just prefer the every day medium, ie walls, chairs, furniture, self, etc.

At least they like to express themselves, though.  And they are really good at their art.  I have oodles of things to choose from every day for their scrap books.  And I take pictures.  When I remember.  Pictures that will make them cringe and laugh when they are older and have kids of their own.

And the circle will be complete.

Familia Morales said…
Reading this post brought back a whole lot of memories! Buy everything washable! Washable crayons, washable markers, hide the colored pencils and pens and definitely the permanent markers. Color Wonder products saved me for a while. Good luck! I hope it's a quick phase for you.
And yes, I love that full circle. I can't wait until my kids have kids of their own and they call me up and say "Mom! You won't believe what little so-and-so did!" And I'll just smile and say, "fun, isn't it?"
September 19, 2012 at 6:59 PM

Confessions of a PTO Mom said…
Mr. Clean Magic Eraser.
Just not on the skin.

Jenny said…
You've been sick a lot lately. I'm worrying about you.

I wish I was there to babysit for you and give you a break!

Sending a hug and a boatload of patience your way.

Natalia said…
I remember when my little sister went through that stage. Except for at the time, we lived in a rental home with wallpaper. We would have to constantly watch her bc once the drawing was on the wall, when we tried washing it off, the wallpaper color went with it.
September 22, 2012 at 12:24 AM