Life According to Plans

I was going to get up early, and we were going to go to the train museum.  Because trains and little boys equal true love.  And little sisters always want to do what big brothers are doing.

It was going to be a delightful outing which everyone was excited for.

But when oh when does life ever go as planned?

I woke up this morning with the headache which haunts me.

Instead, I got up very late, made the kids and myself breakfast, begged my mother in law to watch my kids, and I went back to bed. 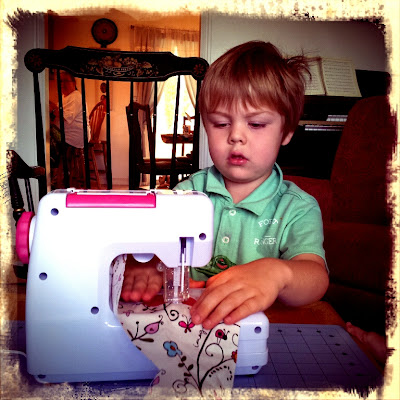 We got him a sewing machine for Christmas because it was super cheap, and anytime I pulled out mine, he tried to push me off it and sew something.

He worked hard while I was down for the count.

He "sewed" a blanket/foot warmer, and a few other things out of scrap material.

It makes me happy to see his creativity flourishing. 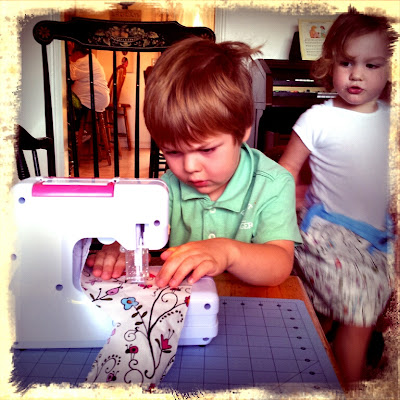 The kids were great today.  Truly and honestly.

Two hours after I took some tylenol it finally kicked in long enough for me to function.  We went to the store, got treats and supplies for dinner, and then I cooked while they sewed.  Such a sweet sight to see them sewing together!

Talking about creativity, we came up with a chore chart that Keith is very excited for.  He wants to help me create it tomorrow, and even more so, to implement it.  Genius!  It will be modeled after his favorite game, the legend of Zelda.  He can earn or lose hearts depending on his behavior, and once all his hearts are gone, there is no chance of earning them back.  If he completes the day with 5 hearts or more, he can play The Legend of Zelda with his Daddy.  5 minutes for every heart he has.

I am so happy to finally have a system to implement.  I have been feeling lost with finding a way to get the kids to have responsibility and accountability.

So my plan is to not make any plans for tomorrow, and hopefully it will go as planned.
Keith

Noodle said…
Both my girls love to sew... I can't leave my sewing machine out or I get some real "creative" stuff made... My mom has an old beat up sewing machine that I should buy off her so my kids can have there own... And I have enough scraps that it won't matter what they make as long as they leave my good fabric alone =)
Oh and my days never go as planed!
July 12, 2012 at 2:00 PM

Susan Anderson said…
It's always good when they are in on the chart and reward system. Hope it works well for BOTH of you.

Lourie said…
Okay...I am in love with the fact that he sews! Awesome! Now...do you have medication stronger for those headaches??? I hope so. :( So sorry.

Confessions of a PTO Mom said…
Plans can be made, but one also has to know that they change. We didn't plan 5 kids, but here we are, staring down number 5 in a matter of days.

Emmy said…
How cute that he sews!! I don't think I would have even thought of letting my kids sew at that age as I would be afraid of what they may do but he looks like he is doing such a good job.
Awesome that you found a system that will work for him- sounds so perfect for him. i am blogging about your dinner tomorrow :)
July 15, 2012 at 9:38 PM