Even On Their Worst Days 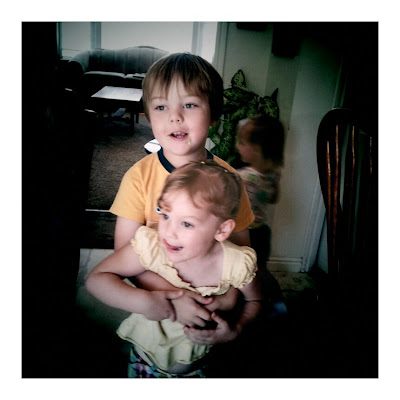 Today was a hard day for them.

We had great plans to go to the car museum, but first we had to run some errands.

The basement flooded in our house a few days ago, so we have been dealing with that lately.  Today we finished up with that.  I got to pick up the carpet fans and return them to the rental store.  After that, we were going to get some groceries for dinner, and then go see the cars.

Only that is not what happened.

There was a whole lot of poking and hitting and name calling in the shopping cart at the store.  I gave a warning, and then had to call off the museum bit of our plans and replace it with a nap for all.  I was sad because I had actually been looking forward to the museum as well.

And napping didn't really happen.  Not at first, anyway.  There was a lot of playing in their beds, and getting out of bed.  I had to do a bit of threatening before they went to bed.

When they woke up, dinner was nearly ready.  I asked Keith to take his 3 pairs of shoes out of the kitchen and put them away in his room.

And for some reason, that set off Mt. Vesuvius.

There was weeping and wailing.  Kicking and name calling.  Screaming and coughing from the screaming.

All over a few pairs of shoes he had left in the kitchen.

We went downstairs and his face was bright red.  I could tell he needed to go to the bathroom, but he was so busy yelling at me, he didn't want to go.  Silly boy.  I took him by the arm and walked him to the bathroom where he slammed the door and told me he didn't like me.

Through the door I told him when he was through, he needed to stay in his room until he could cool off and calm down, and then I went back to making dinner.  Garden tomato sandwiches and Summer Fiesta Salad.  Yum!  Best part?  No cooking involved!

Eventually Keith calmed down, and I sat down with him and had a chat.  He still didn't want to talk with me, though.  It was not fun.

Dinner was eaten and I was told to leave him alone (by himself, of course) and rather than fight with him, I left him to his own bad mood and went about doing things I needed to do.  Laundry.

Earlier in the day (after the store, before naps) I had made some laundry detergent.  It is so much cheaper than buying it!  I hope it works well, though.  I was excited to try the new detergent to see how well it works.  Honestly, anything that can get me excited about doing laundry is a big deal.

When it came time for bedtime, I went up to get the kids to come down and get ready.

And Keith started all over again.  The weeping, wailing, kicking, screaming, etc.  I didn't want to deal with it again, so I recruited Jeffrey to get Keith ready for bed.  Guess what.  Minutes later, Keith was down brushing his teeth, and laughing.  The fickleness of kids is astounding.

About an hour after we got them all tucked in, Keith showed up in our room.

Jeffrey was upstairs, and I was working at my computer.

He had the crinkle eyes from sudden brightness after being used to the dark for so long.  And a slight smile, ever so slight was twitching on his lips.

"Mom, where's Dad?" He asked in a honey drenched voice.

I told him his father was upstairs.  I could see the stalling part of his brain working in overdrive.

"Can I cuddle with you?" he asked innocently.

I told him Mommy and Daddy were not cuddling, so he needed to go back to his bed.  Really, I had surveyed the mess on my bed, and didn't want to get up to clean it off.  Yes, I was being lazy.

As I watched him turn to leave the room, I felt bad.  I told him if he got into bed really fast, I would cuddle with him.

I closed my computer, and hurried off with him.  He was actually excited to get into bed so I would cuddle with him.

I was shocked.  He had not liked me much today.

As I put my arm around him, he leaned into me, so our foreheads were touching and I could see those gorgeous blue eyes of his, so close.  And the sweet faint freckles on his nose.  His freckles are my favorite.

"Mom?  Thank you for always making fruits and vegetables for us." He said.

I had to squeeze him extra tight then.  What a sweet thing to say!

He continued "And do you know when we do yoga?  I like the yoga video we sometimes do together.  Can we do that tomorrow?  I like the one that does animal shapes."

I tousled his hair, and we then talked about how tomorrow would go.  He really likes to know what is coming.

So we made plans for the day, including what he was going to do right when he woke up (prayers, make his bed, get dressed, and clothes put away).  Keith then put his arms around my neck, and told me he really likes when we take care of our bodies and eat good foods and exercise.  And he was glad that I am teaching him those things.

First off, what kid thanks their parents for teaching them things?

Secondly, I could hardly believe this was the same kid who just an hour prior was telling me he didn't like me, and to leave him alone, and was having major meltdown.

But those few moments?

It erased all the feelings from the taxing morning, afternoon and night.

Those few soft words erased all the harsh words spoken earlier that day.

And those eyes?  Well, I didn't stand a chance!  He melted me completely to the point I wanted to say "Your kid is sometimes naughty?  Your kid sometimes is unreasonable?  I am so sorry.  Mine is the best boy ever born!" 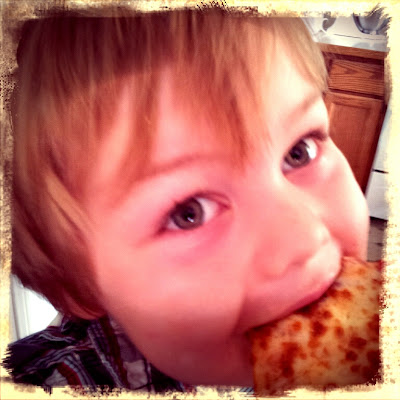 Because that is honestly how I feel.  I am the luckiest mother in the world because I have the best children in the world.  Even on their bad days.
Keith Motherhood

Confessions of a PTO Mom said…
And even when we scream and yell and lose it on them completely, we're still the best mommies ever.
July 27, 2012 at 2:02 PM

Susan Anderson said…
They all have their moments, don't they? But we love 'em anyway.

Cause we're moms! (And 'cause they are adorable.)

I feel for you. It is so hard remaining tough when we're exhausted.

You do a great job with your kids!

I am always impressed with you!

Randomlicious Memoirs said…
That's so precious! That is really something for him to thank you for those things.
My kids are fighting a lot more than normal it's really annoying.
But at night when the kids go to sleep and they say I love you it sure helps!!
August 10, 2012 at 2:24 PM