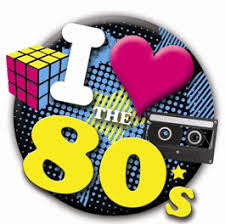 I have it bad.

But having four older siblings who were so deeply entrenched in the culture of the 80's, a lot of it rubbed off.

The first tape I ever owned was given to me by my brother.  It was Europe.  Wings of Tomorrow.  I remember carrying my little playskool tape player around with me and listening to that tape over and over.  I think I was 7.  Dreamer was my favorite song.

Early on, I also inherited an Erasure tape and a Pet Shop Boys tape.  They were treasures.  I memorized every song.

The Erasure love may be genetic, though, since Keith has also discovered Erasure and I am so proud that they are also ranking number one with him right now.  His favorite song is as he calls it Broken Dreams (in actuality it is called Circus).  Can't say that I blame him since it is one of my favorites by them as well.

Monday Jeffrey was going through some of my CDs and asked if he would like any of them.

As I looked at the ones he was contemplating, I morphed back into a giddy school girl.

And so, when I should have been sleeping, I stayed up watching youtube videos of my childhood bands.

Def Leppard is still my favorite for getting up and doing something music.  It fills me with fire.  Not bad consuming fire, but fire that is converted into energy making things go lightyears faster.  And I think I would have seriously crushed on Jon Bon Jovi had I been more into the pop culture and not just the music of the 80's.

I remember being in 7th grade, and the song Always was big.  It was my first taste of his music.  My radio and I became inseparable as I waited for that song to come on, so I could record it, and wear another tape out.  Remember recording songs off the radio?  So glad it is easier to get music now days!

I had never seen a picture of him when I was in 7th grade, though.  I honestly don't think I had ever seen a picture of him until tonight.  Not too shabby, I must say.  Jeffrey rolled his eyes when I said that, but I melt for hair like his.  The shaggy frosted beach hair look.  Melt like a snowball in feverish hands.  It doesn't even have to be frosted.  The beach hair.  It gets me every time.  Always has. 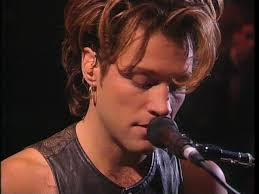 That might be why I had a crush on Jessie from Full House as a kid.  But then again, who didn't?

Oh, the sweet 80's.  In so many ways I am glad they are gone (can we talk about eye killing style?), but the music will always reign supreme in my book.
Ramblings

The 80s were just me trying to survive in a household of small children.

Myya said…
I loved this, 80's music rocks!! My sister in law was THE BIGGEST Bon Jovi fan in high school. Oh my gosh it was out of control. LOL.

Unknown said…
I can totally rock out with ya! The 80's rock!!

Trish said…
Seriously, Jessie was the hottest! I guess its because he spent so much time on his hair. And he had that sexy voice too, lol! You know I always thought that the 40s were your decade...so do you love the 80s more than the 40s?
October 15, 2011 at 1:43 PM

Em said…
emmy is right. 80's country is nothing but awful. i have become a country pop fan in the last ten years, but only b/c it's not that awful 80's sound.

there is nothing i love more than some good 80s music to get me into a good mood. and i must say i have really loved all of the 80s fashion that has worked its way back into our decade here. i sure did love my bedazzled shirt loop through thing (do you know what i'm talking about???) that i had in white, pink, yellow, black, etc. but i'm glad those have not resurfaced. some things ARE better left in the past:)
October 17, 2011 at 5:00 PM

alpinekleins said…
Hee hee hee - so much fun to read . . . I have such wonderful memories of the 80's. We actually got married in 1980 and so I always remember those times as young newlyweds having such a blast together! Thanks for the memories :)