Keep Your Arms And Hands Inside The Ride At All Times...

June 27, 2011
This past weekend was a whirlwind of emotions.  Enough ups and downs to make a roller coaster jealous.

Thursday and Friday were the viewing and funeral of my sweet little nephew.


Grief.
He looked so peaceful and pain free.


Relief/Gratitude.
Friday evening Jeffrey and I tried to get everything ready and packed so we could leave early the next morning and be up to Bear Lake for breakfast.  Part of getting ready was making a few mix CDs.

Fun.
However, we didn't get to bed until late, and that meant we left late.
Tired.
My inlaws, knowing our little beat up jalopy had no AC, and that we would be forced to drive with the windows down the whole way, lent us their SUV.
Relief.
Driving up there was perfect.  It was exactly how I have always imagined marriage:  The children happily playing in the back.  Faye was coloring, and Keith was reading books.  The mountains gliding past us, and some sweet tunes playing on the radio.  Jeffrey and I were holding hands, and the sun was making everything seem golden.
A dream come true.
When we were driving over the past, I was so excited, straining for the first glimpse of the Lake.  A tradition I have always done since I was a child.

From the back seat, Faye started to make whimpers and soft crying sounds.  I looked back just in time to see all of her breakfast, freshly decorating her shirt and blanket and car seat.
Shock.
We pulled over and stripped her down, cleaning out the car as best we could to get rid of that smell and to help her be more comfortable.
Disgust.
We got to the beach where my family was happily playing in the water and sunning themselves.  And then ensued four hours of complete bliss.

I don't own a bathing suit, and was wearing a sun dress.  I walked in the water, relishing in the mud sucking my feet down and the waves gently lapping at my legs.

Keith became a fish, while Faye sat in a puddle near the shore with a bucket.  She played for hours.  Jeffrey was immediately the jungle gym for all the little kids to climb on and try to dunk.

After playing for a while, and visiting with my family, I noticed Faye's face had changed a little.  A look of consternation and discomfort was prominent.  I picked her up and was greeted by a foul smell.  Diarrhea.

Sadness/Gross.
Changing a swimming diaper full of that was not fun.
Again, before we left she again had another similar diaper.
My-baby-is-sick Worry.
We piled back in the car to realize we didn't know where the campsite was, and everyone had already left.  There was no cell phone reception.  We drove around for a while looking for everyone and eventually found them.  We were greeted with exclamations over my sunburn.  I got it bad.  I forgot to apply some to my skin while I was so worried about getting it on my kiddos.
Pain.
We played around the campfire and in the hammocks and on the rope swing for the rest of the evening.  Planning future family vacations, eating good food, and enjoying each other's company.

So excited.
After dinner I announced we would not be staying due to Faye being sick.
Disappointment.
On our way out of Bear Lake, we made the obligatory stop at Le Beau's for Raspberry shakes.

We piled back into the car and headed home.  We did not stop at the Logan Temple (where Jeffrey and I were married) as planned since it was so late and we needed to get the kids to bed.

Understanding disappointment.
The river was so high and had flooded the road in a few places, but I don't think there are many places more beautiful than those Mountains.
Gratitude and Awe at the splendor of God's hand.
We got home, exhausted, unpacked the car, packed the kids into their beds....
Panic.
Mr. Bear was missing. 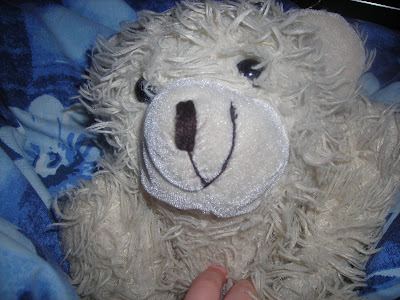 We stayed up late trying to get in touch with my family.  We called all the places we had stopped.  We made plans to get up early the next morning.  A part of our family was lost.
Grief and dismay.
We didn't sleep well.  We got up early the next morning and made many more phone calls.  Eventually we got in touch with my parents.  They went to the beach and searched for Mr. Bear.  They stopped at all the places we had stopped and made inquires.  Mr. Bear is gone.
Keith is heart broken, which kills me.  I think I have cried over Mr. Bear more than Keith has.  He is so young and should not have to experience such a painful loss this early in his life.
Life is not fair.
Blame.
While at church yesterday I was informed that my house which we are renting out, had a flood in the back yard.  Nothing got into the house, but the back yard was a complete pond.
Panic.  Wishing to get off the roller coaster.
I rushed out of church, hurried up to the house to find that it had been a gross overstatement.  There was a small patch in the back of the yard that was slightly flooded, but most of the yard was bone dry.  A pipe had burst from all the water pressure.
Relief.
I got back to church, and Keith was in the hall.  He had been naughty in class and so had to leave.
Sad.  Disappointed.
I had a little talk with him and sent him back to class.  I went to my class but had missed most of the lesson.  Only 10 minutes were left.
I got home, tucked Keith in to bed, explained that Mr. Bear was gone.  The look of heart break on his face was too much.  We cried together.  I explained to him that while we were in the Mountains, Mr. Bear had liked it so much, he had decided to stay.  He was with his family up there.  Keith didn't believe me.  He said that Mr. Bear was at the library and we could just go there and get him.  I told him libraries are for books and not bears.  Keith began to cry anew and said "that is not right!  Mr. Bear has to be there!"
Such sadness for my son.
Once I got him to bed, I tucked myself in.  I was so completely physically and emotionally exhausted from that weekend.
I got off the roller coaster and climbed into my bed.
What a ride!
Motherhood

Susan Anderson said…
I don't think you could have described it any better. And I feel like I took the roller coaster ride with you!

Emmy said…
Wow that really was a roller coaster! So sorry she got sick. I am impressed you stayed as long as you did- I think Eric would have wanted to turn around immediately.
And that is so sad about the bear- and you are a good mom, I don't think I would have cried with my kids I would have taken the tough approach. You are a great example
June 28, 2011 at 11:30 AM

Familia Morales said…
What a weekend! All those ups and downs are what keeps life interesting.
June 28, 2011 at 1:04 PM

Shannon said…
Oh Amy, I am so sorry to hear about your sweet little angel nephew :( I think you have felt every emotion in the book, and all in one day! I hope life "evens out" for you for the next while, you deserve it!
June 28, 2011 at 9:53 PM

Noodle said…
Holy cow Amy what a crazy day... I'm glad you got to spend time with your family... I understand the rollercoaster ride of emoitions... I hope every thing evens outs at least for a few day =)
June 29, 2011 at 6:45 PM

Lourie said…
You are such a trooper, Amy! So sorry Faye got sick.