When Mommy and Daddy Die in the Fire 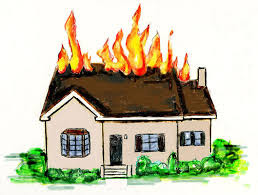 Keith has been worrying me a bit lately.

He is inscesantly talking about a topic that I really don't like.

Nearly every day I hear:

"Mommy, when the house catches on fire and you and Daddy die and Grandma will come and put out the fire and save me and Faye and take us to live with her and we will be safe.  That will be good, hu?"

I have tried and tried to explain to him that wouldn't be happening, but for some reason, no matter how many times I explain, he still goes on about it.

I think he became fixated on this topic a while back when I was trying to explain what an orphan was.  I told him an orphan is someone who doesn't have a mommy or daddy.  He asked what happened to their mommy and daddy.  I told them sometimes they die.  He asked how.  I said maybe in a car accident, maybe they were sick, I didn't know.  But I told him he didn't need to worry because nothing would ever happen to his mommy and daddy.  And even if something did, he would still be safe because so many people love him, and someone else would take care of him, so he didn't need to worry.

Even writing about it makes me a little anxious.  I guess I don't like to think of anything bad happening to anyone in my family.

We had another long talk about it today.  I really hope it sticks this time, because I am very uncomfortable with my three year old talking about when I die, so matter of factly.

I have a lot to learn about being a good effective mother.

Unknown said…
That is always a hard one to talk about. How do you get a three year old to stop talking about death? I'm not sure. But I think you are doing a great job trying to teach him that that probably won't happen. Maybe try and teach him some fire safety. And what you, as a family, can to do prepare for a fire. Hold a small fire drill, or something. I know you can find "handouts" on what to do online. There are some geared to little kids and they can help plan and map out how to get out of the house and where to meet.
Good luck!
April 4, 2011 at 9:38 AM

Erin said…
Oh man, that is hard. I think as long as you keep answering matter-of-fact like, he will eventually wrap his head around it and move onto something else to ask :)
April 4, 2011 at 10:55 AM

Confessions of a PTO Mom said…
Last May my best friend died at the age of 39. Our families were very intertwined for a period, and the loss of her in my life happened at a time when I so desperately needed her to stay. My girls have seen me fall apart over it a few too many times, and they are often afraid that when I don't feel well that I am going to die. I hate when then talk about me going to Heaven. But I use it as a time to talk about how love transcends.
April 4, 2011 at 11:15 AM

Susan Anderson said…
I think he is just working through his anxieties about losing you (probably aroused by the orphan discussion, but he could have picked up on something in the news or a storybook or whatever...Has he seen Bambi?)

Doesn't really matter where he got it, the thing is that fire is probably his own idea of the scariest thing that could happen. It's good that he is able to take that a step farther and know he would be safe with family members. It shows he's secure and connected.

If I were you, I wouldn't try to talk him out of it, and I wouldn't spend time discussing it, either. Every time he said it, I would just say....You're right, Keith. No matter what happens, you will always be safe because so many people love you.

Lisa said…
Actually I have the same problem right now. My Sara talks constantly about her babies that died. I miscarried twins a year ago, but I didn't think she remembered. Even now, though, I'll catch her playing by herself saying "This is Kaylee. She has 3 babies but 2 of them died. But her other baby is ok so she's happy." Constantly. And my Kirk did the same thing when he was 3 - ALWAYS talking about his Grandma Healey and how she died and how he wanted to see her. He even got fixated on Paul's dog that died just before we were married. I think it's a phase they go through. What I have done is just made death seem not scary, but more sacred. Let them know that it's OK to talk about with mommy, but it's not going to happen anytime soon to us.
April 4, 2011 at 10:10 PM

Myya said…
My girls do this too. They always ask who they will live with or where they will go. They also are always asking why or how someone dies, like when they hear something on the news or me talking about someone or whatever they are just so consumed with it at times. Today my 5 year old asked me how a baby gets put in someones belly. I think I explained it well enough that it didn't leave her wondering too much, but geesh these kids can get fixated on something & can be relentless about it. Geesh!
April 5, 2011 at 11:53 PM

Francisca and Chris said…
We have some flash cards for the twins to teach them words: happy, fun, etc. One of them is sad. It has a Carebear crying over a broken toy. Harm obsesses over it. It is really creepy. Our family therapist from his school said it is pretty normal for this age to find things like that and fixate over them.

So try not to worry too much about Keith. I'm sorry he has been so fixated. Harmon doesn't understand that people die. I'm not looking forward to that day when he does learn. Since I was so sick I had to be away from my kids for a whole day. It was sad Rachel cried Mamma all day. Families are so precious and like you I don't want to ever think about something hurting that.
April 6, 2011 at 5:17 PM