I Blatantly Lied and I Felt Good About It 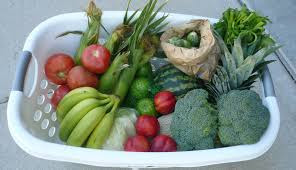 I was asked many questions about the co-op.

Because you all seem to want to get your produce for cheap or something.

So anyway, I have been thinking about co-ops for a while.  A few weeks ago I mentioned to a friend that I wanted to join one and he told me his parents used to participate, but they eventually quit because they began to have too much food.

I googled food co-ops in my area and was surprised to find about four.  They all worked differently, and all sounded amazing.  I eventually decided on Bountiful Baskets.

I told Jeffrey about it and he was against it.  I explained that we would be getting our produce at the price grocers pay, and he was still against it.  I told him it was a much better and cheaper way to get our food and he didn't like it still.

So I sat on it.  I sat and thought and tried hard to convince Jeffrey that it was a good idea and he still said no.

So I did what any wife would do.

Now before I get called all sorts of names, I have to explain.  I know Jeffrey well.  I knew it was something he would love if he would only give it a chance, but stepping out onto ledges is not his specialty.  I do normally listen to his counsel.  But just this time, I knew he had to try it.

So I signed up.

The way it works is you sign up on Monday.  You decide which baskets you want (but you don't get to decide what you get in the basket, that is just whatever they have on hand), and pay the money, and chose where you want to pick it up.  Saturday morning (early) you go and pick the food up.

And I have to admit, I lied.  Which is uncharacteristic of me.  I very rarely lie.

But I lied through my teeth.  I told him I thought he had said no to doing it that week, and that later would be fine, so I signed up later (full well knowing that was not true).  After much discussion, we were no longer arguing about it, and it was decided I would get up and get the food.

I went with my basket, and twenty minutes later was home with 5 loaves of 9 grain bread, a bunch of bananas, strawberries, pumelos, a cantelope, apples and oranges, tomatoes, cucumbers, fancy lettuce, 2 bundles of asparagus, broccoli, and cauliflower.  All for $25.

And I was right all along.

Jeffrey loves it and is in full support of it.

I did admit to him that I had lied, and I apologized.  I told him I don't normally do that, but it was something I just knew he would love, so I couldn't resist.

And that is a co-op.  I highly recommend you all find one in your area.  So awesome, and the food is great.  And, for just $5 (or was it $10) more you could have all your food be organic.
Fun with Jeff and Amy

Terra said…
Wow, that is a lot of food for $25 bucks! I bet it was nice and fresh too! I wonder can all it be devoured before it goes bad? I suppose you can freeze the bread - I am going to google it and see if there are any in my area - it is most certainly worth a try!
February 3, 2011 at 5:18 AM

Jenny said…
You make me laugh. We used to do this when we still had kids at home and then it got to be too much food.

I just read about a 1/2 basket co-op that I'm going to check out. That might be a good alternative.

Noodle said…
I love the 9 grain bread.. And it freezes really good... I have had to stop getting our basket because of all the stress and meetings for our new house I'm not cooking at home as much... But I love how it helps me cook with diffrent veg's...
February 3, 2011 at 9:02 AM

Susan Anderson said…
Had to chuckle about this.

I have thought of joining one of these, and I think I will. My DIL has loved it.

Brea Marie said…
My sister, Krista and her neighbor Melanie split a basket every week. Krista will only eat the 9 grain bread now. She stocks up on it and freezes it.
We had been getting baskets, but things have been a little crazy lately, so we took a break. Good to hear you and Jeffrey like it!
February 3, 2011 at 11:36 AM

Francisca and Chris said…
LOL! Chris does that sometimes and is always surprised that I unearth his misdeed within a short amount of time.

Gina said…
I participated in a co-op over the summer but it was way too much produce for my little family. Now that I'm making G's food, I might try it again.
February 4, 2011 at 7:30 PM

Chantel said…
We've been doing Bountiful Baskets for awhile now. I love it!!! Brian likes that we get creative on what we're eating because I'm always googling recipes for the random weird produce that we get.
February 7, 2011 at 12:34 PM

Anonymous said…
Hahaha, that's hilarious. I love your justification for lying to your poor husband, "I knew it was something he would love if he gave it a chance." And that food looks amazing, sounds like a great program
February 14, 2011 at 3:44 PM