How the Binki Fairy Crashed and Burned 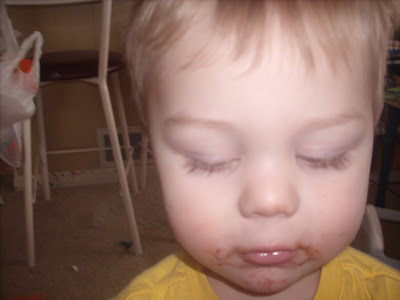 Keith really does not sleep without his binki. It is a sad fact, but nonetheless, there it is. He loved getting the sword and cookies, but when naptime came, the world came to an end. At least Keith's world did. There was no binki. How could he go on? He must throw a tantrum to match that of Hurricane Katrina, if not rival it. There would be no sleeping without the binki. He made that very clear to me. (I know, who is the parent, right? But I wanted him to nap, so I had to think of something!) So I tried phase two of Operation Get Rid of Binki. Many people have said to cut off the tip of his binki and he will lose interest.

Out of desperation I tried that yesterday. He needed to nap, but I refused to have him sucking his binki. I cut the tip off, feeling like a very mean mother indeed, and gave it to him. Greedily he grabbed it and stuffed it in his mouth. I watched as his tear stained face changed from contentment to confusion. He pulled the binki out, examined it, and then put it back in. A minute later it was out and being investigated again, but immediately re-inserted into his mouth. And then he went to bed. And he slept. For two and a half hours. What bliss!

Now with the binki, Keith will suck on it all day if I would let him. For the past year or so we have had a rule he could only have it when he was in bed. But he would find one, and sneakily put it in his mouth and go around hoping we didn't realize. Sometimes he would find a binki, and then poke his head into whichever room I was in, just to show me the binki and then run away and hide. Precocious child that he is. After his nap yesterday, however, he got out of bed and carried his binki in his hand. He played with it. He would put it in his mouth but would chew on it and not suck it. I was rather entertained throughout. He seemed to want it with him, but was over having to have it in his mouth.

Until bedtime, that is. Holly Hannah, when it was time for bed, he let out a holler because he wanted his binki. Jeffrey didn't know where it was. As soon as it was found, the plug was put in and the crying instantly ceased. When I got him up this morning, there was no binki to be seen! I am thinking it is going to take some time for him to get used to it, but the binki may just be going out of style here in our home! What a great idea it was to cut the tip off! I thought it was mean at first, but really, it wasn't mean at all, and he is happy, and there were no tears or fighting when it was time for him to give it up. Wonderful! Thank you to everyone who suggested this method. I love you all!

For all those interested, I made a recipe from my new cookbook yesterday. I will be posting it on my cooking blog today, so head on over and see what I made!

Tiffany said…
so, i had to read the first sentence a few times because i kept reading 'bikini' instead of 'binki'.

we quit G's paci cold turkey. she was only using it to sleep and when we lost the last one we had we just didn't buy another one. it was a rough few days going to bed at night and naptime but, eventually, she got over it.
January 12, 2010 at 11:01 AM

Veronica said…
I had never heard that tip before! I'm glad it seems to be working for you guys :)

Brianna gave hers up on her own at 3, right after Katie was born. She was convinced her toddler sized binkie was actually her baby sister's and refused to use it any longer.

Katie was harder. The binkie fairy came and took all the binkies away leaving her cold hard cash at the age of 4-4.5..

Alex uses one still, but usually when he is hurt, tired or for bed. Otherwise he could care less. And it usually falls out of his mouth once he is asleep!
January 12, 2010 at 11:11 AM

Kaibee said…
Oooh, I wanted to be the first one to comment!!

Anyway, well nice to know that the binki is finally going out of style!!! I think the whole, Kieth poking his head in a room just to show you the binki and then running away part was waayyyy beyond cute!!!
Mom's have to be mean sometimes but in the end, it always pays off. You aren't a good mom unless you are a mean one at times.
Have a nice day.. And hey, I know, though it is late, but I never got a chance to say 'Happy new year' to you, So 'Happy new year, Amy, may the year ahead be a wonderful one for you and your family!'

Gail said…
THey are so cute with their pacifiers.... yep, the cutting the tip off seemed to work well for us. It was enough for Theo to think he had a dummy in his mouth... but he would lose interest in it quickly because there was nothing there. On his own he moved from the tip-less dummy to putting his fingers in his mouth to nothing.

Emmy said…
Hope it keeps working! Good luck... and it will pass and if it wasn't for this blog and having written it down you would forget all about it someday :)

Sue said…
Sounds like you're definitely on the right track.

3LittleMonkeys said…
I have heard that tip before. And you just keep cutting off a bit more everyday until there is nothing left! I'm gonna have to start doing that with my 2 year old son...I'm just not ready yet!!!
January 12, 2010 at 2:20 PM

Capt'n Amazing's wife said…
I agree with Sue. Also I hope that Parker doesn't have problems when he is getting older. I try to only use the binky when no other method is working. He does sleep often without it so hopefully that works. When he needs to suck he just shoves his fist in his mouth. (as you saw on the video!) It is pretty cute when he does it.
January 12, 2010 at 2:28 PM