They are probably my favorite stories to read. I have all of the Grimm Brothers, but quite honestly Hans Christian Anderson's stories are my favorite. They make me smile as I read them.

I used to imagine I lived in my own fairy tale complete with villain and an unsuspected faceless knight in shining armor. I would imagine different situations he would save me from. And always they would end with me being carried away in his strong arms to safety.

Once I got married I no longer imagined those stories. I never really knew why. When I tried they just wouldn't come. I was a little sad at their loss, but never fretted over it much.

Yesterday I learned why I no longer can imagine my precious knight.

I don't have to any more. I married him.

It started out like any other day. The morning went exactly as planned. I had my morning devotional, got the kids breakfast. I then helped Keith make his bed and say his prayers. We painted and read and drew robots and really, it was perfect.

Then the nap monster happened. It was time for him to go to sleep. I kissed him and tucked him in with his book and then left the room. I was excited to get to my exercising and then showered while they were sleeping. But then Faye woke up. I played with her until she got tired again and then put her back down. I then discovered my dvd was broken. Someone (Keith) must have stepped on it because it was broken down the middle. I wanted to cry! But I didn't. I grabbed a different work out video and went to town. Half way through my 10 minute work out the phone rang. Interrupted my heart rate. But I got back to it and had a good 10 minutes of body cleansing joy.

Right when I finished I heard a pounding on Keith's door. Went back and after an hour ordeal got him to go back to bed. And then his sister woke up. I really think they tag team. She was really fussy. I had just fed her so I tried to burp her, but she didn't want that, nor was her diaper dirty, so I played and put her back down with vain hopes of her letting me get anything done.

About that time I remembered our insurance company needed her ssn that day or her benefits would be diminished. Not good. So I called the insurance company. I was put on hold for 70 minutes. Really. Our phone has a time counter on it. I checked the second they answered. 70 minutes to be tied to a non cordless phone. All the while Faye was fussing and crying, and Keith was pounding on his door to be let out.

During that 70 minutes Jeffrey tried to call me. I told him to get on gmail and we would chat. I have no idea how he knew something was amiss, but he asked me if I would like to not cook dinner and he would provide something for me. I was so grateful! He said he would leave work right then, and would see me shortly.

I decided a shower was imperative, so put a movie on to distract Keith, put Faye in her car seat and put that in the bathroom. I then got in the shower, and she screamed the whole time. Not very relaxing, I can tell you.

I got out and rushed her into the bedroom where I got descent and then sat down to feed her. After about 5 minutes of eating I heard her poop. I was glad as she hadn't pooped all day. But then she started to squirm so I patted her back.

That isn't a sound you want to hear when patting someones back. I groaned and looked. Her poop had gone all the way up her back somehow. I changed her diaper but saw a bath was in order. I rushed her to the sink and gave her a quick clean up. As I was drying her off, she peed all over. All the while Keith was following me around telling me he had a poopy diaper. I told him he had to wait, but I would get to him as soon as his sister was clean. Another bath, for Faye and this time I didn't wait to dry her off before I put a diaper on. No more accidents! Right then Jeffrey walked in the door. 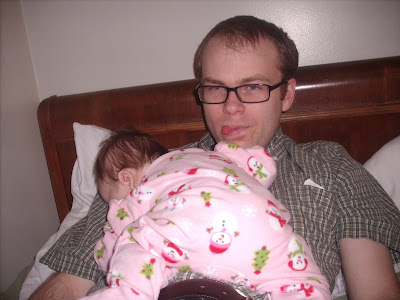 He took Keith, turned off the movie, and got his diaper changed. He then took Faye and held her so I could get dressed the rest of the way, and get my hair pulled back. He then told me we were going out and he had arranged a sitter. I could have cried with relief! He had also brought me some dark chocolate. There were three kinds. One with 53% cocoa, 60% cocoa, and 75% cocoa. Talk about really dark! Just what I needed! I felt a little guilty because while I was showering Keith found a bag of chocolate chips in the freezer and when I got out, I finished them off. There was about an eighth of a bag left when I found them. Oh sweet deliverance!

We piled the kids in the car, and dropped them off at their grandmother's house. I was so relieved for the little break. How on earth did Jeffrey know I needed it? I don't know. But that, my friends is why I don't have to invent a knight any more. My Jeffrey wears that polished and shinning armor proudly. And he does carry me off into the sunset on those rough difficult days. 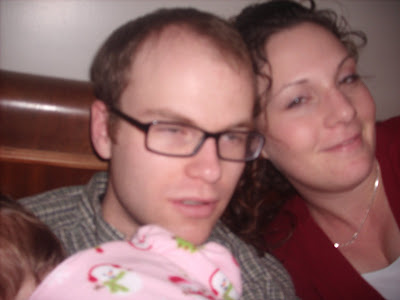 What a lucky girl I am.

And they lived happily ever after.

Kori said…
What a very sweet post-though I will tell you that hearing about your very hectic day made MY blood pressure go up! :)
January 5, 2010 at 8:27 AM

Seems to me like you are BOTH lucky. The knight AND his princess. (Correct that...blog queen!)

Familia Morales said…
What a nice ending to a stressful kind of day. Hope you had lots of fun on your impromptu date.

A friend of mine decided her new year's resolution would be to eat a piece of chocolate every day. I think it's a resolution every mama should make!
January 5, 2010 at 1:31 PM

tinahead81 said…
what a great post! those stressful days are so hard to get through, i know! so glad you have your knight...isnt' it great when they know exactly what you need with out being asked. awesome. :o)
January 6, 2010 at 7:46 AM

Bec said…
How sweet! Sometimes a little surprise is all we need!

I've missed checking out your blog...but I'm back from my travels now so hopefully I'll be able to keep up! Hope you & your little fam had a lovely Christmas! happy new year!
January 6, 2010 at 9:36 AM

The girl with the flour in her hair said…
What an amazing post! I love it. I can't stop smiling. So sweet.

Steph @ Diapers and Divinity said…
Yep, you're lucky. I am too. I love posts like this that help me remember that there ARE lots of good men left out there in the world.
January 6, 2010 at 8:26 PM