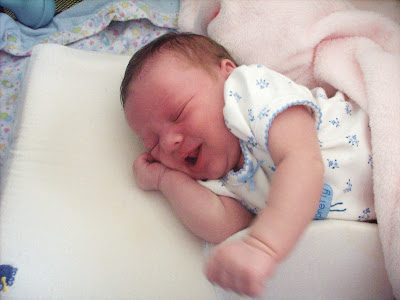 photo taken not 10 minutes after she ate. She is calling for her third lunch.
The doctors deny it, saying it is impossible, but I know I am right.

I did not give birth to a little human girl, I really gave birth to a hobbit. I say this because the only place she ever wants to be is in my arms eating. I can almost hear her little thoughts

as I am wiping the milk off her chin. She is great with multi tasking also. Sleeping and eating at the same time is quite the feat, I hear. I have never personally tried it but imagine it takes a good amount of talent (I sometimes miss my mouth when I try to eat with my eyes closed... and may or may not have missed when my eyes were wide open.)


I make no exaggeration when I say she eats for about 40 minutes nearly every hour. I have a very sore tush from all the sitting I have been doing. By the time she hit four days old she had already recovered her birth weight. At two days old the doctor was concerned by the loss in weight. Evidently it was a lot. Two days later it was back. She just eats and eats!

Of course Jeffrey denies any hobbit heritage in his family. I think it is all just a big cover up. How else would you explain her desire for second breakfast, and even third breakfast? That isn't even mentioning all the lunches and dinners she wants. Jeffrey swears it is just because she is a girl.

When he was a teenager he had a friend who hated it when his youth group would do activities with the girls because "Girls eat all the food. When they come there is never anything left for us!" His friend swears that girls have voracious appetites and only pretend to be dainty eaters. In all actuality they are more like vacuums.

I suppose if he is telling the truth about the lack of hobit heritage, he could be right about Faye and her curious appetite.

She is just a girl.

Emmy said…
Too funny. You might have to try a paci.. maybe she just wants to suck. This is what happened with my Alex. I thought she always wanted to eat too, but then she would be spitting up a lot because she was overeating. So paci it was for her.
And trust me she was never skinny. We used to call her chubs.
December 2, 2009 at 8:22 AM

Sue said…
Cute post, Amy! You might want to try using a pacifier between feedings and not feeding any more frequently than 2-3 hours. This teaches them to take more at one feeding instead of just "snacking" all day long. It also helps miminize some of the wear and tear all that sucking can cause on YOUR body.

JaNae said…
Is she really sucking and swallowing the whole 40 minutes, or just sucking as she sleeps? Hopefully it's just a temporary growth spurt. Babies are hard to figure out sometimes!

Chantel said…
Avy was like that as a newborn. Still is, I guess. She eats more than any baby I've ever seen. I think it's her way to not have any younger brothers or sisters. I can't go back on my fertility meds if we don't wean and weaning's not going so well. Alicey was eating a lot more solids by Avy's age. I don't know what to do with her!!
December 2, 2009 at 11:29 AM

Crystal Jigsaw said…
Just too beautiful for words. You forget how hungry they are at that age!

Samurai Mom said…
Keep feeding her! It is totally normal and healthy for a Breastfed baby to eat that often. Breast milk is very easily digested and does NOT stick around in the tummy for hours like formula. Don't worry soon she will be more awake and eat less. You are doing a great job!
December 4, 2009 at 1:31 PM

Natasha said…
I just want to pinch her cheeks and hold her for days! I love babies and your Faye is just darling! Can I come over and steal her away?
December 13, 2009 at 10:58 PM

Erin said…
Ohh she is so cute. I am so glad everything went well with the birth. Congratulations! She is darling.
December 15, 2009 at 8:59 AM