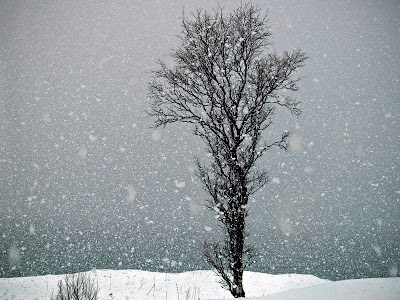 source
Hi. My name is Amy and I was once a Snow Hater.
Hi, Amy!
I know. Growing up in UT, the state that supposedly has the Greatest Snow on Earth, and I used to hate the snow. But I have since turned from my blasphemous ways. There was a time when I equated snow with ugliness and cold. When people began to talk about their love of the stuff, I would always counter with a disbelieveing gufah and talk about the cold and the wet. I saw the world as very grey and cold and dirty when there was snow. I would say (though I had no statistic to back it up) that there were far more traffic related deaths in the winter because of the snow. Snow is a killer. And then 10 years ago it suddenly changed.
I lived in a small mining town in the top of the Rockies where it snowed nearly every day from October until March. And it was cold. I remember the first day I began to like the snow. I was sitting inside alone. The apartment was tiny, but cozy. I had a mug full of rich Stephen's hot cocoa (really, it is the best out there. No disputing that) and eating buttered popcorn. I was watching a movie, but was slightly bored with it. I remember looking out the window and seeing the huge snowflakes falling down so softly. They were quietly covering the last layer of snow that had turned brown from the car exhaust and all the mud from people's shoes. I remember thinking how beautiful it was.
And that was it. It took 18 years before I joined the ranks of the snow lovers, but I am most definitely there.
I love the snow.
I love the huge soft flakes as they lazily fall from the sky. The small fast ones are nice to because they just get the job done. No lazy floating for them, they rush to the ground like an army, advancing and canvasing the enemy territory. They are determined to cover anything and everything.
I love looking up into the sky at night as it is snowing and seeing the grey orange sky. The strange warmth that comes with the snow.
I love when they stick to my hair and my eyelashes. And catching them on my tongue is a delight I doubt I will ever outgrow.
I love making snow angels.
I love the crunch of snow under my shoes.
I love coming into a cozy house after playing outside and running my hands under cold water. The cold always feels so hot, and stings a little as my hands defrost.
I love turning the lights down or off and sitting on the couch sipping cocoa while watching the world change to the brilliant white.
I love snow forts and snow men and snow balls.
But most of all, I love seeing Keith in the snow. He begs every morning to go out and jump in the leaves. We then bundle him up, and he runs out and stomps around in the snow. The delight on his face makes me a child again, and we play. I can't wait until there is enough snow to actually pile up and let Keith toss around! What a delight for him! And then to come in to cocoa and (hopefully) warm cookies or gingerbread... I know, I am an idealist, but he will get that one day.

I really miss the snow. It just makes everything brighter! It snows here every now and then but not like in Utah!

I do miss all that white stuff...
It's so fun to play in it with our kids...we then feel like kids again ourselves:)

I am just the opposite.. snow LOVER my whole life.. and now while I do miss it at times and still find it a bit magical, I just don't miss it hat much anymore.

I finally recognized the award you gave me. Sorry I was so slow about it.

I have tried to explain to Nick the cozy feeling you get from seeing snow outside and being warm inside but he is still gaffawing. (wow what a spelling job!) He loves his Texas weather. I don't mind that it doesn't snow here, but I don't really want to stay here forever. I have loads of fond snow memories from my childhood. And if we stay here then all our kids will remember will be the huge bugs, swimming a lot, and not knowing what it is to be cold. Hopefully this dilemma will not materialize for us.

Confessions From A Working Mom said...

Wow, I wish I had that same love for snow! I grew up in Ohio, and while I miss it at times, I haven't been able to capture what you described there!

I've got something for you on my blog. When you get a chance, stop by and pick it up!

so glad you've joined the ranks;-)

SPEAKING FROM THE CRIB said...

i am currently a snow hater except on christmas day - i know, enough already but i can't help it

i do love the first blanket of snow too but other than that u can keep winter :)