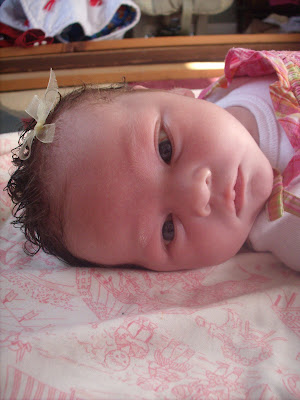 We just had a very sweet week of getting to know Faye. Let me introduce you:

Faye is the sweetest baby I have ever encountered. Of course, I thought the same thing about Keith, but really, Faye is even more easy going than her big brother was. She only cries if I am not fast enough at getting her food to her. From day 1 she worried me though. She was sleeping through the night. She has a hard time waking up to eat if it is the middle of the night. I have grown accustomed to it though and am explicitly happy that I only have to wake up once in the night to feed her rather than the every two hours that we had going on with Keith.

Speaking of Keith, she has completely enchanted him. In the mornings the first place he goes when he wakes up is her bassinet. He peeks over the side and says something along the lines of "Baby Faye sleeping. Shhhhh." or "My sister is asleep." He has tried to share his beloved Mr. Bear with her which absolutely shocked me since he wont even let me hold his bear longer than 10 seconds or so. But something about the cute sleeping angel has even touched the two year old. 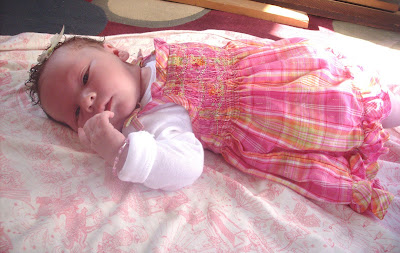 She has the sweetest dimples in the corners of her mouth. One on each side. And then she also has her father's dimple in her right cheek. A.dor.able!

She hums or sighs as she sleeps. She likes to hold my hand as she eats.

And the smiles. Faye has the sweetest smiles. I know that people say it is just gas (why would gas make a baby smile? Never really understood that one.), babies that young don't know how to smile. I disagree. She smiles at us all the time, and has even giggled a few times.

I have heard many times in the past week that she looks just like I did as a baby, but I have to disagree. I have never at any point in my life been as beautiful as she is. I can look at her for hours and still marvel at her perfection and sweetness. 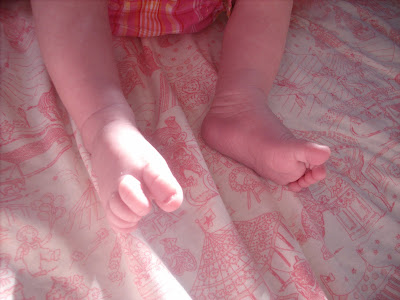 She has the three of us simply bewitched.

And we wouldn't have it any other way.

Amy said…
Yay! I finally found my camera! as soon as morning comes I will post some pictures so check back later.
November 30, 2009 at 6:24 AM

Jenny said…
So sweet! I know that newborns can really smile. All three of mine did and it was not gas! And yay for only one feeding a night. All of my kids were like that and I just went with it. In fact my first two slept through the night before one month old. The doctor said that it was fine. Hooray!
November 30, 2009 at 7:27 AM

Chantel said…
Oh Faye! What a sweet little one. Maybe she can teach Avy a thing or two about sleeping. We're at 9 months and still fighting to sleep through the night. GRRR!
November 30, 2009 at 8:35 AM

Sue said…
She sounds just about perfect! And that's great that your 2-year-old actually LIKES her. How lucky is that?

Chantel said…
and in response to your comment on my blog....

I've got both Gone With the Wind and White Christmas on video. If you change your mind and ever want to watch them let me know and I'd be happy to let you borrow them.
November 30, 2009 at 9:09 AM

Capt'n Amazing's wife said…
Aww that's so precious! I'll check back for pics! We're having a late comer but we're convinced that it'll be very worth the long wait.
November 30, 2009 at 9:32 AM

Gail said…
Oh AMY! COngratulations! For some reason I didn't have you on my blogroll and have waiting for your news to show!!!
She is absolutely divine. What a blessing! I pray that you will just have the most joyous time getting to know your precious babe - that your quiver will just be overflowing with the goodness a gift like a baby can bring!

Bless you!
And thank you for popping by!