The Dark Side of Halloween

October 31, 2009
*Updated with picutres*
It is dark outside. The icy white moon is bathing the street in a cold stare. Trees have stretched their shadows out providing ample space for dark lurking forms to glide almost unseen through the streets.

A witch is seen scurrying from the revealing eye of the porch light. A ghost is running after a tall man walking down the road. A sound that seems displaced echos through the night. Laughter. Children's voices exclaiming as they bounce around from the sweets pulsing through their veins. Shortly they will go home and laps into a sugar induced coma. 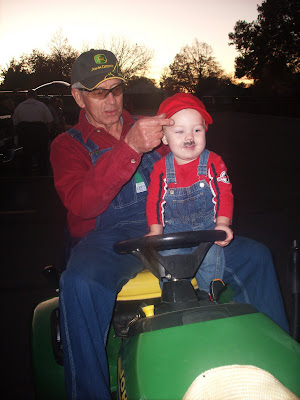 This is when all things dark and vicious come out. The witches and ghosts and goblins pry the masks off their sticky faces. The princesses, Hulks, and zombies wash the paint to reveal sweetly smiling children. But do not be fooled by their disguise in a disguise. While out pillaging the neighborhood of all things sweet, they really did morph into something quite chilling to behold. Until the parent says "Its bedtime. I am glad you had fun. Now put the candy away and climb into your bed and go to sleep." they look like children. But they are not. And when the realization hits home, even the bravest parent wishes they could turn back. The frigid grip of regret has hold of their hearts and makes parents grateful this holiday only comes around once a year... 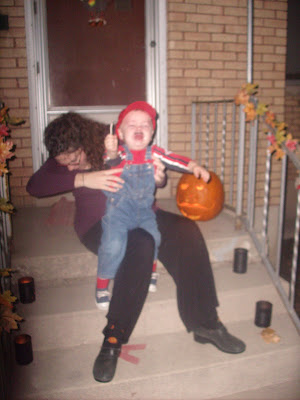 Last night we had a small taste of this fear. It was my mother's ward Trunk or Treat. Keith was Mario (I didn't get a great picture of him. He wouldn't hold still. I am going to try again tonight) and caught on very quickly. All he had to say was "Trick or Treat" and people would give him candy. He would then say "Thank you" and they would give him more candy because he was so polite and cute. He knew how to work the system. He carried that bucket around with him as if he held The Ark of the Covenant. No one was going to get close to his candy. After collecting with the vengeance of an IRS agent he became a shadow to his Paca while religiously guarding his candy bucket. 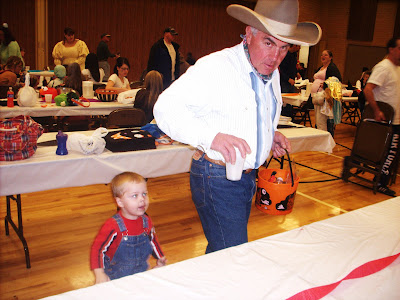 Finally it was time to go home. He fell asleep in the car, we got him in the house, and as we changed him into his pajamas he woke up. The first word out of his mouth was "Trick or treat?" Meaning, "Where's my candy?" We told him he could have some more in the morning when he woke up, and that is when it happened. The transformation. From sweet cuddly angel to Halloween Demon faster than the blink of an eye. He hasn't changed back yet. He is armed with a two year old attitude and a bucket of candy. And there is more Trick or Treating to be done tonight.

Whatever will we do?

I was Hester Prynne from Nathaniel Hawthorne's The Scarlet Letter for Halloween this year. You know, the girl who had to wear the Scarlet "A" for "Adulteress." Did you see the "A" which fell off right before the picture was taken? Only about 5 people got it but I thought it was funny. What were you for Halloween?

P.S. No, she hasn't been born yet. I have just been crazy busy and haven't had time to post anything.

And my computer is having major issues, so I will post the pictures as soon as I can fix it.

Capt'n Amazing's wife said…
That was fun to read. I'm not super into the Halloween spirit this year. We invited our friends over for dinner but they just called us and said their toddler has a fever. So now I'm stuck here not wanting to answer the door at all or do anything. And if I make my pumpkin ice cream then Nick won't even eat any. Most people would think that was a good thing, but when I cook I just want to share the love. Anyway, my spirit is totally deflated now. Good to know that you guys are going to have fun tonight though!
October 31, 2009 at 4:59 PM

Emmy said…
Love this post!! So clever and so so true. Amazing how wonderful and charming they can be if it means getting something. :)
October 31, 2009 at 8:05 PM

Lara said…
And it lasts for weeks if they get a ton of candy!

Which is why I devised a clever plan this year and bought their candy from them. My husband will take it work so I won't eat it, either. They got ten pieces each and the fun of getting it and we got the rest for ten dollars. And a Barbie for my youngest since money means nothing to her.
October 31, 2009 at 8:21 PM

Chris and Francisca Hakes said…
Oh my heck Keith is so darn cure. Hope you all didn't have candy overload. Right now it is nearing mid-night and my little boy is so hopped up on sugar still it will take a miracle to get him to bed.
October 31, 2009 at 11:37 PM

Noodle said…
I was a cheerleader and johnny was a foot ball player... Sammy was little bo peep and Ally a sheep... Sammy fiugered out the trick or treating thing too but she wanted to eat all her candy as soon as they put it in her bag... but she soon figured out that it was hers and it would be safe in that little bag of hers glad you guys had a great halloween...
November 1, 2009 at 7:39 AM