Play For Your Life 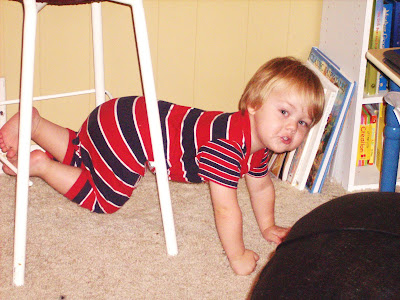 Have I ever told you that Jeffrey is a genius? No? Well, he is.

For fun he likes to learn. He enjoys listening to podcasts of astronomy and psychology rather than music or anything. Weird.

He found a podcast on the value of learning.

He thought it was important I listen to it. This is what I learned:

Evidently a man has done 30 years of studying play, (what a job!) and has found some very interesting results.

Evidently all of the mass murders he has studied had completely suppressed play in their lives. They had no release and only worked. Because of that, they kind of lost it. In mice those who were not allowed physical interaction became less productive and coherent (can you call a mouse coherent? Maybe that isn't the word I am looking for).

The basis of the whole podcast (or all that I heard... my ipod started it all over after I was half way through, and so I haven't listened to it all yet) is if there isn't a balance in your life, you can become a mass murderer. Also, the more you play you have (mixed in with all your other activities) the better you function in whatever capacity you are working in.

Excuse us now as we are off to enrich our lives with lots of play!

Whew. I was worried about my son there for a minute!

That's why our motto is: The couple who plays together, stays together!