Growing Up is Hard To Do... for the mom

He is a big boy now, he informs me.

He can do things that I do every day.

This determination of his has its definite perks. He is now cleaning his own room, and cleaning up his own messes. He has been throwing his dirty diapers away for some time now, and just last week he learned to make his bed! With him helping the cleaning has gotten a touch easier. 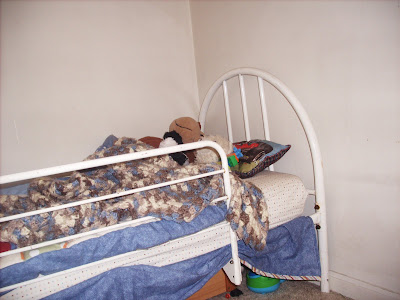 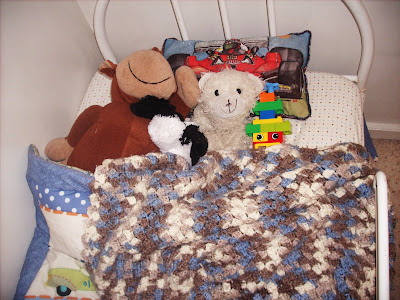 Yes, he did put his animals and his "robot" in his bed after he made it.

However, there are drawbacks.

He loves the camera. Last week he decided he wanted to learn how to use it. Since I was in the room, and I am pretty good about keeping the camera out of his reach, I foolishly thought it would be okay to let him learn to use the camera while I am around. He is a natural! The pictures posted were all taken by him. Such talent.

And then yesterday it all backfired.

We went to visit family, namely my brother who just had a new baby. While all the grownups were down in the living room, the kids were playing quietly upstairs. One by one the kids left with their respective families which left Keith upstairs by himself. That is a recipe for disaster. Acting upon instinct, I left the comfortable conversation to check on my klepto. I found him playing with my sister in law's camera. He saw me and hurriedly said

Already practicing to pass the blame. His poor little sister doesn't stand a chance! I took the camera from him and together we went downstairs. Upon further inspection, I discovered the camera had been broken. My brother and sister in law claim that it was having problems before he somehow destroyed their only camera. Did I mention they have two adorable preschoolers and a new baby? They are a picture taking family. My son destroyed their memory maker.

Sigh. I guess this is just the beginning of the destruction my son will cause as he grows older. Can't he just stay a little boy for always? 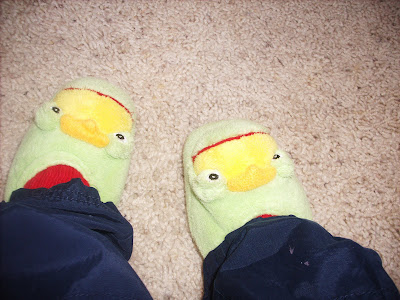 Familia Morales said…
Let the blame-game begin! How nice that your little boy is starting to help out with the messes. Now all you have to do is teach him how to do laundry and dishes and you'll have it made!
September 28, 2009 at 7:17 AM

Em said…
i cried looking at a picture of brennan last summer realizing he looked more like a toddler than a baby now. however, i will not admit that he is still not a baby until after this new baby is born. we must have a baby in our house at all times;-)
September 28, 2009 at 9:09 AM

Lisa Anne said…
That's funny. They grow up way to quickly. Okay okay I'll enable my darn email. LOl Just for you though!! Even though I'd rather have you comment on my blog then just reply to me. LOL
September 28, 2009 at 9:38 AM

valentine said…
that really sucks about the camera, being a childless aunt, it makes me so sad when little ones break my stuff.
September 28, 2009 at 11:39 AM

Carissa(GoodnCrazy) said…
How sweet.. they learn early.. he's imitating you which is awesome right...? And not so much too.. good luck with all that!

Lisa Anne said…
I'm trying to add my email address but hotmail isn't letting me set up a new account. It's gonna be a pain to check three different email accounts everyday, but my personal email is clogging with 100's of comments. lol

Alicia said…
ughhhh i hate when that kind of stuff happens!! my kids once deleted ALL of the pictures on my camera...i was devastated!! but how sweet that he makes his bed...too cute!!
September 28, 2009 at 4:42 PM

Chris and Francisca Hakes said…
Callum is now wearing Harm's preemie clothes and when I look at him and think of Harm I realize this lasts so little time and once you blink it is over. It is a beautiful heartbreaking process of growing up (especially for the moms).
September 28, 2009 at 9:28 PM

Momisodes said…
Ugh. I'm so sorry to hear about the camera. It's amazing how early they learn. My daughter is the only child at the moment, and she's already been caught blaming our dog!
September 29, 2009 at 8:32 PM