Cheap thrills for a cheap parent

What this means is I am going to have a guest come visit us here on Happily Ever After. See, I know you all love to hear from me (just humor me, alright) but there are so many talented writers out there, and so many people who just make my day by reading what they have to say. So, I thought I would share a little of my blogroll with you. Now you can have a little taste of the magic I feast on every day.
.
.
.

But that is not what I wanted to talk about today.


(Imagine Guy Smiley talking over a roaring crowd and the next paragraph will be so much better.)

I want to share with you a little secret I learned...
Kids love cheap thrills.
No need to buy the expensive toy, or take them to the amusement park. No. I can give you the secret to happiness for a small child with just three simple things. Most of these things can be found in or near your very own home. Act now, and I will throw in a few pictures. Free! What do you have to do? Just keep reading.


(See, didn't Mr. Smiley make it so much better than if you had read it normal? I'm just sayin is all.)

Keith got a gift from his grandparents recently. It is now his faaaaaavorite toy in the world. He spends hours at it. A little table with a road on one side, and a lego platform on the other side. Today we bought him some legos to mount on the lego side and boy, he is one happy little one. 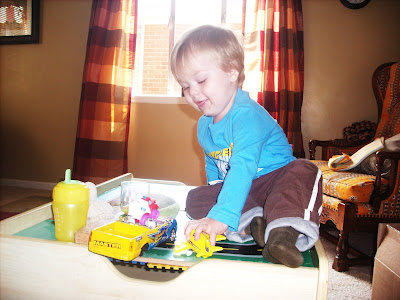 Do you remember the commercial?

Well, it should have been "Keith, Keith, he's a lego maniac." But I suppose that doesn't rhyme, but boy howdy did they get it all wrong. I hereby submit that the mascot of the lego company be changed to my Keith. Yup, that is what I say. 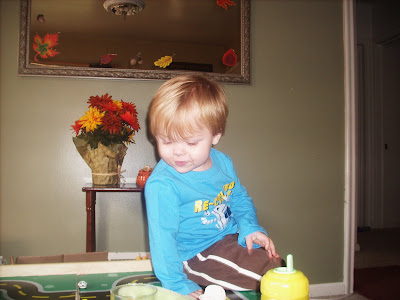 Why is it my son has a dirty mouth in every picture I take of him? He isn't always like that, I promise! Moving along, after I pried him away from the legos, we went outside, and yet another delight accosted us.

There, nearly in my own front yard were four or five big "tractors!" 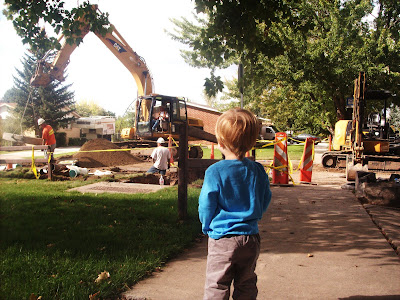 I know they aren't really tractors, but for simplicity sake, that is what we are telling Keith. It would be a little too confusing if we told him it is called a cat. He associates cats with the cute little fluffy things that run from him. After sitting on the sidewalk and watching the construction workers play with their big rigs, I decided that we had creeped them out enough. They had been shooting us furtive glances the whole time. Yes, I am sure we were creepy to them. But the delight of a small child is easy to come by if there are large machines around, and we are all about the cheap thrills in life. Big Bird enjoyed the show as well. 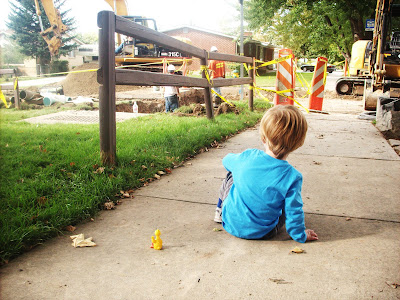 Take a close look at the bottom left hand corner of this picture.

Do you see it?

Here, let me help you. 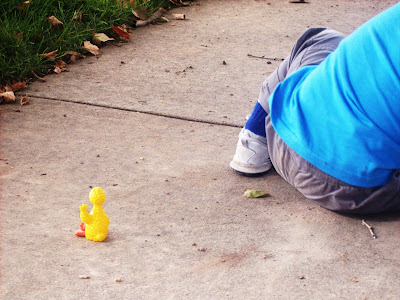 Keith made sure Big Bird could see everything. I didn't even get a spot that good.

Humph. Now I guess we all know who his favorite is. And it isn't his mother.

After about ten to fifteen mintues of watchin I decided it was time to move on. In order to stop creeping out the big burly men I told Keith about our next plan. He jumped up and beat me to the car when he heard ducks were involved in our next stop. Sadly, right as we got to the park where they live it started to rain. Hard. Poor little duckies were spared the usual ordeal of running for their lives as my little hunter ran after them screaming with delight.

And thus concluded our day! But seriously folks, if you want to entertain a small boy, all you need are a few legos, some ducks, and a construction sight.

Capt'n Amazing's wife said…
Amen, sista! I just want to keep things simple for my kids too! (And I want to keep my house clean) so I'm going to entertain with as little money spent as possible!
September 16, 2009 at 9:33 AM

Momisodes said…
That is too funny. He definitely looks mesmerized with the construction site!
September 16, 2009 at 10:48 AM