When he isn't throwing tantrums

August 19, 2009
And then there are the days where my son just impresses me with his goodness and love.

I have a glass bowl on my dresser with starbursts in it. I will let Keith get one out occasionally if he asks first.

Yesterday he got one, and then another, and then another. When he pulled out a fourth and asked me to unwrap it for him, I put my foot down. Three is more than enough for him, especially when it is getting close to bedtime. I saw him run back over to the candy bowl and reach up.

"No, Keith, you've had enough today." was on the edge of my lips and then what I saw truly humbled me.

He reached back up into the bowl, and put the candy back!

No fuss was made, he was simply being obedient.

Even on the worst of days, he is still a great kid!

These pictures have nothing to do with anything, I just thought they were really cute. 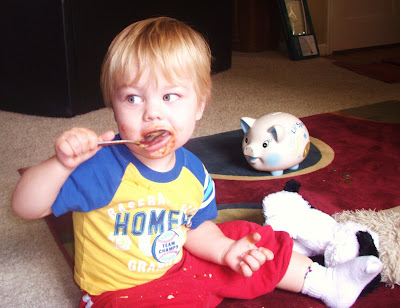 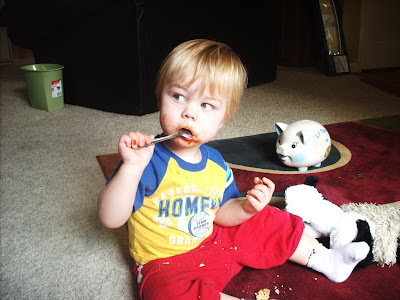 On a side note, I don't think I can contain myself any longer. The fall decorations are coming out very very soon. I have been trying to hold out until September 1st, but since today is the first day of school for so many people, doesn't that mean that fall has officially started? Which means autumn decorations are legal, right?

Natasha said…
Amazing! I don't even obey when I tell myself to put down the candy.

I am so glad that you love fall as much as I do. We have a fall table runner and a berry garland that we keep on the table the entire year (save for Christmas) which brings me joy every time I see it. It may be hotter than hades outside, but inside is a nice comfy, homey, autumn.
August 19, 2009 at 11:35 AM

Capt'n Amazing's wife said…
Did you know that ads pop up on your blog when I read it? It's a little annoying because it covers up your posts and takes my attention off of what I'm reading.

Noodle said…
Sammy surpises me sometimes too... That is way cute that he put it back... I love when I'm feeling frusterated and then all of a sundden she does something that just makes me laugh... Everyday she makes me laugh at something... I guess thats the pay I get as a mommy...
August 19, 2009 at 9:06 PM

Em said…
my mom moved to hawaii. we had a TON of stuff stored at her place, including all of my decorations for holidays. we had to move our stuff into another storage place last night. i saw all of my halloween decorations go by and thought, is sept too early to decorate???;-)
August 20, 2009 at 9:41 AM