My Romance with Running Water

August 31, 2009
I don't like to make understatements. Or overstatements for that matter, though I am prone to do so. But when I say this past weekend was a huge stressful weekend, that is an understatement in the grossest form.

See, as you recall, I was sick all week last week (pesky iron and vitamin pills!). I was looking forward to having a peaceful relaxing weekend with my family. Possibly going to a museum or at the very least a park. But that was not in the stars for us.

While cleaning my abode (and I regret to say it was in dire need of a good airing out and scrubbing) Jeffrey went downstairs to put some food away when he suddenly ran back up the stairs, grabbed the plunger, and with a wink to me disappeared down the stairs again. Since he didn't say anything I didn't worry about it.

Eventually I wandered down to the dungeon, as I like to call it, to find him. He was busily mopping up the lake that had decided to settle all over my floor. 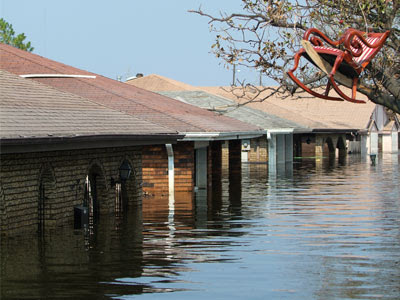 source
He was cheerfully battling the wet forces with a mop, bucket, and a joyful tune nonchalantly whistled.

Swamp monsters seemed to be trying to come up through the drain, and that Knight of mine cheerfully whacked them back down the drain. I ran up the stairs and called my neighbor who happens to be a plumber. I also called a neighbor who had a wet vac, and together the three men fought the dark forces of the sewer. The plumber poured some chemical rocks down the drain and told us to run hot water for 5 minutes in about an hour, and then the cavalry left us home with great hopes of having running water again.

Now remember the sick of the prior week? That meant I had towers of dishes and pans piled next to my sink, and loads and loads of laundry littering my floor. I couldn't do any of them. My son also decided to develop a diaper rash at about that time, but a bath was out of the question.

However, Keith being the curious little guy he is, decided he wanted to flush the toilet, which he did. The only problem with that is it hadn't been an hour since the chemical rocks were added to our weaponry, and hadn't had a chance to activate thoroughly. Keith's curiosity had de-activated the chemical genius, and we were not awarded with the expected effects.

The swamp monster was winning. 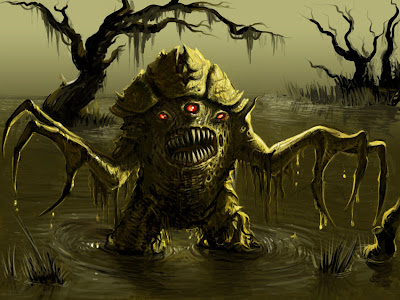 source
Our friend who lives in our basement was not amused. He couldn't use his shower or sink either.

Did I mention no one had showered yet? Nope, not a one. That was mistake number two.

After a great battle all afternoon, Keith went to bed with images of him vanquishing the evil sewer dweller, but in reality with us loosing. We had to call in back-up.

We called a Roto-rooter type guy, and left a message for him.

And then we collapsed onto the couch with a pizza, hoping that somehow the magic crystals Keith de-activated would actually work during the night, and we went to bed.

In the morning all looked well. So, the next order of business was tackling the diaper rash. I plopped Keith into the tub, and we started our typical Sunday morning routine, grateful we didn't have church until 1:00.

As the tub was draining Jeffrey came up with bad news. The drain monsters were merely sleeping, but had awakened with a vengeance. 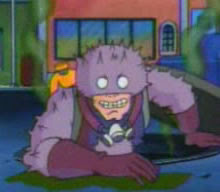 source
So, we did what anyone would do in our situation. We retreated. We gathered up all our laundry and our bathing instruments and headed off to my in-law's home. Laundry was incredibly important to finish as Jeffrey would not have anything to wear to work on Monday.

We spent most of the morning there getting ready for church, getting laundry done (don't judge, it was the ox in the mire situation) and me putting the final touches on my lesson. By the time we were ready to come home and let Keith nap, he was exhausted! We weren't able to wake him in time for church -really, he wouldn't wake up!- so I left the boys home and taught my lesson. Blah blah blah... to make a long story short, (or at least to try to salvage this one since it is already way too long) I got a phone call from the roto-rooter guy this morning. Evidently his help should have called us Saturday and come and fixed the problem, but decided to go hunting instead, so he is coming today, and will put an end to the sewer urchin's reign of terror once and for all.

And then I can take a shower! 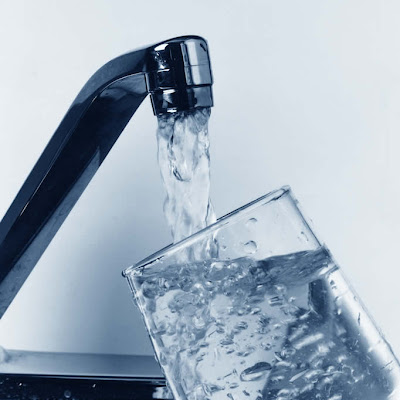 source
Now I can truly say, I am having a love affair with that commodity we all take for granted so often. Indoor plumbing.

Taren said…
i am loving your latest obsession with water! and I hope you're feeling better! oh, and that email idea is so great! i always wanted to respond to comments but it gets so confusing sometimes!
August 31, 2009 at 12:02 PM

Familia Morales said…
I love the way you tell stories! It's so entertaining to read--not to experience--especially for you. Oh, and the pictures that you put up with this story--love 'em!

Unknown said…
Why did your basement decide to turn into a swamp? Did it rain hard that the flood water crept inside your house? Yeah, that would totally be gross, not to mention inconvenient, since it causes indoor plumbing problems too. I hope that’s the last time this domestic woe happened to you.