August 14, 2009
Yesterday I learned a valuable lesson from my son.

He has been grouchy beyond reason lately. I blame the toddler bed.

Yesterday morning he woke up around 7:00. By nine o'clock his tantrums had escalated and were nearly un-manageable. I was going to attempt a nap time for him around ten, but he surprised me.

"Night night Mommy." I heard while I was washing the dishes. I turned and saw him standing in the doorway with a binki in his mouth, his bear held tight against his chest, and his eyes drooping. I rejoiced. A nine oclock bedtime is something he hadn't wanted in nearly a year.

We went into his room, I hugged him and tucked him in, and then left him there. He slept until 11:30! Oh happiness. I was able to get a lot done during that time.

At noon we left the comfortably cool house and entered the heat zone. Keith in his stroller, and me behind him, pushing the Beast. We walked for what seemed like hours. When we arrived at our destination I looked much like a sweating lobster. On our walk Keith pointed out some rather beautiful things. I really wanted to get a picture of the raspberry bush, but it was at the end of the walk and I just didn't have the energy to bend down and pull out my camera again. But the leaves from the beginning of the walk were divine. 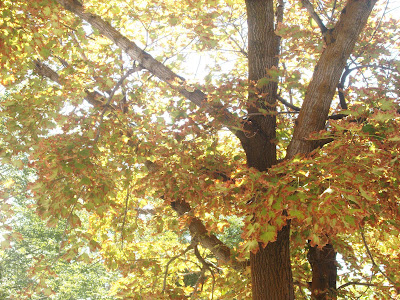 We ended our walk at a cute little cafe and met up with my dear best friend/cousin and her husband. We have only seen each other once in the last 5 years or so, and it was wonderful to see her again!

As my cousin Ja Nae and I were catching up, Keith was quietly playing. (Quietly playing is an euphemism for making a wreck of the cafe, terrorizing the other patrons and in general wreaking havoc all around... as all toddlers do.) After a little while we noticed he was playing with his Semi truck that he had brought with him. He had tired of driving the truck into the food and all over the table, window, and booth. He was finally doing something quiet which is what attracted us. He had disconnected the trailer from the cab of his semi and was making slurping sounds. I asked him what he was doing, and he looked up, smiled, and said "kissing! Cars kissing!" We all laughed, and he continued to make his car kiss. 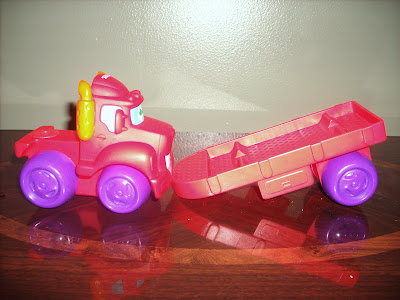 Later last night he was playing with his miniature police men when he got quiet again. Jeffrey noticed first and asked him what he was doing.

"Hugging! They are hugging."

And he continued to let them hug for a little while. Jeffrey was not happy about that. 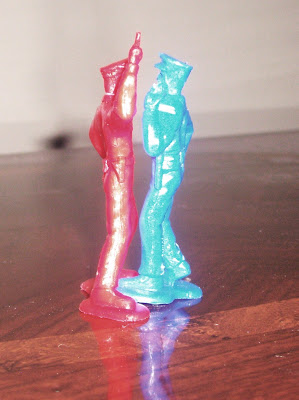 "They are not hugging! They fight crime together. They do not hug."

What a loving little boy I have! He even likes to have his toys be nice to each other and to give kisses and hugs.

For a more clear understanding on who I am go here.

Capt'n Amazing's wife said…
I love that! It reminds me of when we were putting up the fishy stickers on the baby room wall and Nick was trying to make up funny scenes for the sea creatures to do. A lot of them were violent, and I told him that I'm not going to encourage violence. Anyway, so that's what it made me think of.
August 14, 2009 at 11:36 AM

valentine said…
looks like your neighbor's tree is starting to change. i am very excited for fall. not winter. fall.

Meaghan said…
stopping by from SITS to say hi :) Love your blog and your post! Love the tree but am surprised its looking fall like so early

Familia Morales said…
I just saw your nesting list...can you come do your nesting at my house? :) Keith is so cute! Don't you just love how pregnancy makes you too tired to even grab your camera out of your purse?
August 16, 2009 at 2:51 PM