I am married today because I tripped.

We had gone to a fireside with a group of friends where John Bytheway was speaking. When it was over we went for a walk around my neighborhood. All of us. That was one of my favorite things to do. Twilight walks. I remember how warm the air was, and how the stars seemed to just glitter. It was all so familiar.

We ended up at my parents house and he suggested we watch a movie, so I put on a Bill Cosby movie, and together we sat on the couch in my parent's basement and watched it. Our friends gradually left and I found myself alone. 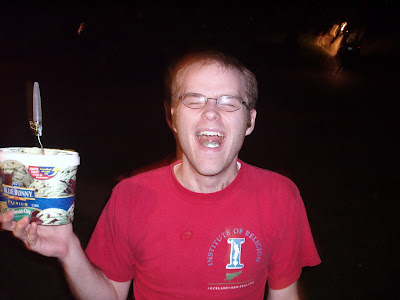 I recal walking the last friend to the door and upon returning to the movie, I tripped on my own clumsy feet as I was sitting down, and fell into him. He then immediately put his arm around me and I froze. Who was this guy and what was he doing? I mean I had known him for years but never more than a friend. Part of me melted. It felt so good to have a warm protective arm around me again. The other part of me wanted to run away and never look back. I knew what an arm around the shoulders meant. It meant he liked me, and the possibility of a relationship was looming on the horizon. Something I was not ready for at all.

My serious problem of indecision led me to just sit there, allowing him to pull me close while I thought out all the implications, a war raging within while sniggering to Mr. Cosby's take on childbirth without. I had stalled too long, and if I were to pull away now, it would be very awkward. Besides, I wasn't all that sure I wanted to pull away. I did like him a little.

I gradually felt my body relax, and after it had slipped into a state of semi-comfort, he took my hand and it started all over again. The fears, the feeling of contentment because I really liked the attention, not certain how I felt about him. I mean, I knew I liked him, but I didn't know how much and the fear of a relationship sent me recoiling with disquietude.

But he was patient. He smiled, the dimple that always made me catch my breath winking at me from his cheek, and held my hand a little tighter. He knew I was nervous but also knew how to win. He was good at wining. With his arm still protectively around me he turned his attention away from me and back to the movie. I told you he was good. False sense of security I tell you.

I recall sitting so close to him I could feel his body heat. I began thinking out the possibilities. Here was a boy I could easily like. He was smart, funny, a complete gentleman, and made me feel like I was the most important person in the world. I felt the pressure of my hand in his. I thought about all that it implied. I decided I could handle it. We could hold hands for a month or more, and we could take things very slowly and I would be alright with that. Maybe in a few months we might even kiss. That thought made me nervous, so I pushed it away.

Eventually, I completely relaxed. I didn't jump every time he moved. I didn't tighten every time there was a shift in his weight. I felt warm and secure. It was such a sweet feeling. I looked up at him and smiled. He turned his full attention on me, raised my hand to his lips and kissed while never looking away from my eyes. When I didn't pull away, he turned my hand over and kissed the palm. When he saw a slight smile on my dazed face, he pulled me close and gently kissed my cheek, then my other cheek, and then my lips. 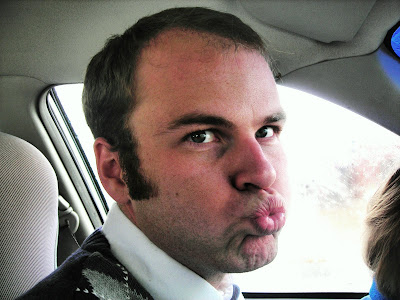 Again, my first instinct was to pull away, but he had already calmed me sufficiently. I trusted him. And let's be honest. He was by far the best kisser I had ever encountered. 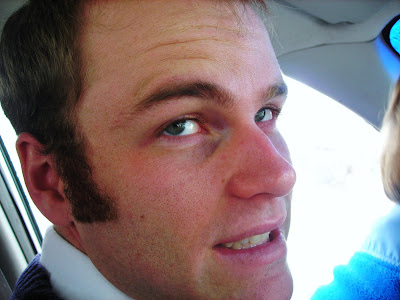 And that was the start of it. I was a goner from there on out. I mean, he could sense when I was uncomfortable and would put me at ease. He was always a complete gentleman, and was the best kisser the world has ever known!

And the rest, as they say, was history!

Amy said…
Just for clarification, and because he insists I need to say that he thought it looked like I didn't trip, but snuggled in close to him on purpose. Also, he claims I gave him "that look" the one that says "come hither and kiss me." which I still don't know how to give, but that is his side of the story, and he was slightly distraught that I wasn't telling it. Obviously you can see his side makes no sense at all, but in his mind that is what happened. :)
August 16, 2009 at 6:40 PM

Lisa Anne said…
That;s a great story!! I look forward to reading more of your blogs.

Noodle said…
How sweet! It's so nice when you find THE ONE... I thought that i would never get married with out dating for at least a year or more and then a long engadement... Nope 2 and a half week and I had a ring and a 3 months and we were married and I've never been happier... Glad that we have hubbys that knew what was best for us... They have to be right every once in a while... but we wont tell them =)
August 16, 2009 at 10:53 PM

valentine said…
what a sweet story! i love when small inconsequential things lead to wonderful things.


i am doing a giveaway, you should stop by to sign up!

Steph @ Diapers and Divinity said…
See? You have a lovely story, too! Everyone's story is the best to them because it's exactly what they needed to get them where they are. p.s. You can tell us the truth if you didn't trip-- you really jumped into his lap didn't you? *wink*
August 20, 2009 at 8:05 PM