A House Divided Against Itself...

A war in my very own home, against my very own offspring, a messy house, and the chaos which is a result of it all.

Church has begun to be a real joy with a squirming swearing screaming child. Meal times have begun to be pretty lonely for me since toys are much more appealing than eating.

And so, tactics had to be planned.

After a brief war council with Jeffrey over the phone, we decided the best weapons we have are our love and attention.

I unplugged the television, made sandwiches, packed up the car, and we left the messes behind. We went to a musem, but saddly, it had closed right when we got there. After stopping by a nearby arcade so Keith could pretend he was drivving 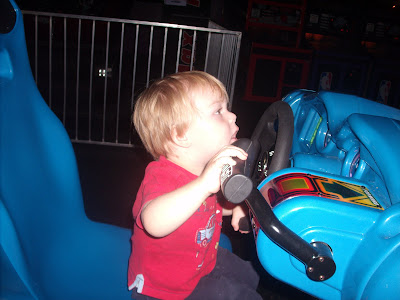 we got back into the car and headed to a wet lands walk way. We walked it and enjoyed the river rushing by and the cool air and the birds all around. 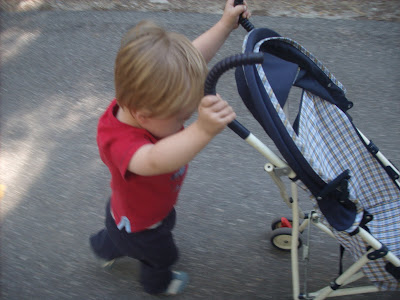 Eventually Keith got a little tired and wanted to go home and "Squish Daddy!" which is his way of asking to wrestle.

We rushed home, made grilled cheese sandwiches and then settled in for a fun night of FHE. 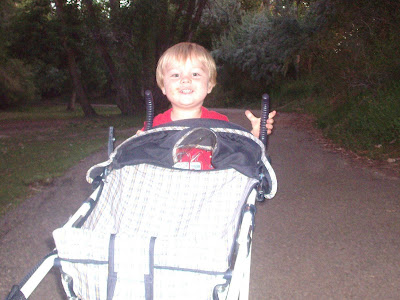 Yes, that is tomato soup and dirt all over his face. 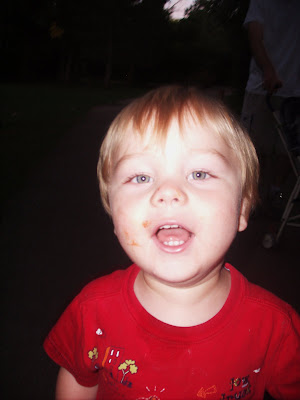 We lovingly walked around the park, chasing ducks and watching as he slid down dirt hills on his tummy. 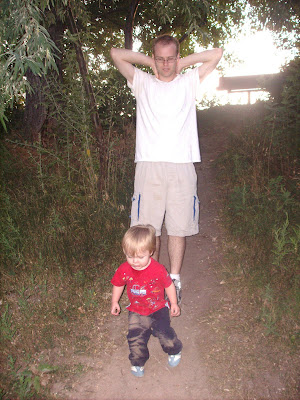 It was a lot of fun, and he got a lot of attention. Perfect!

When we got home we decided that our tactics are working beautifully. Already we have noticed less tantrums and less fussing. Beautiful.

When we got back from the park and got Keith to bed, Jeffrey being the studmuffin he is decided he was going to re-caulk the bathroom. 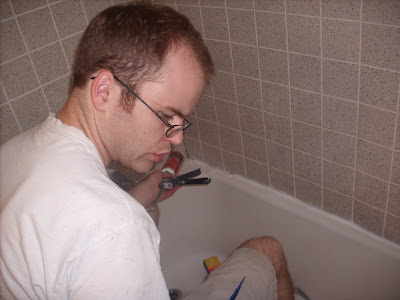 What an awesome man I married! First his war tactics then fixing the bathroom... yup, he is basically the best ever. 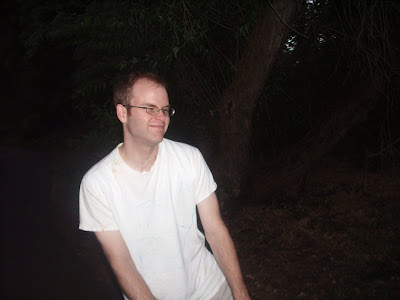 What are some of your war tactics? Obviously we need a little help here.

Tina said…
Glad to hear your war tactics are working! We like to cuddle with Amber when she's acting out. A little Mommy & Daddy loving gets her back on track (for a little while)
August 18, 2009 at 6:09 AM

Capt'n Amazing's wife said…
Our friend's son was acting really ornery and stuff the other day too. When he would normally would have been happy just playing with his toys, he suddenly couldn't stand the thought of any one person not giving him their full and undivided attention. I guess its just a phase? He's about 15 months, is that how old your son is too? Its nice to know what I have to look forward to...
August 18, 2009 at 7:23 AM

Kaibee said…
Hey Amy,
Thanks for dropping by!
Well it's sooo nice to see that your tactics are actually working, I don't have any tactics to offer, I am just a teenager!!! But maybe my mom has some! And maybe she's putting me through some now!! hmmmmm!!! I wonder!! :P
August 18, 2009 at 8:17 AM

Noodle said…
Sammy loves being the center of atention so when she acts out we ignore her until she is ready to clam down then we give her tons of loves... The tantrums are coming less and are a lot shorter.... But she is in a testing phase right now and is trying to get away with everything... yeah I think she is trying to start her terable twos as well...
August 18, 2009 at 9:12 AM

Megs said…
that's adorable!! seriously! very good tactic... actually one of the best :)) i've noticed with all my younger siblings that the more love and such you show them the better they are. :)))

Em said…
haha, i saw this bumper sticker yesterday that said "house divided" and i FOR SURE thought you were talking about byu/utah football. i was going to be so sad for you if you had separate fans in your house! and you might, but hopefully you are a Y fan?????:-) it's august, so this means no wearing red for us for awhile;-)
August 18, 2009 at 9:58 AM

Andrea said…
Our kids all seem to go through the "terrible 18-month" stage and then it ends when they're about 2 1/2. So...we're in smack dab in the middle of it with Aaron who just turned two. Your war tactics are great--we've found that a little extra love and attention go a long way with cranky kids. Good luck!
August 18, 2009 at 10:26 AM

Eva Gallant said…
Sounds to me like you've pretty much got your battle strategy under control!

Erin said…
Sounds like going outside was a great idea! I know my kids are always better behaved when we spend time outside.
August 18, 2009 at 3:47 PM

Stephanie Faris said…
You guys have a lot of energy! I am not a mom, just a probable future stepmom, so take this for what it's worth (not much) but it seems kids act up when they get bored. They're seeking attention, entertainment, etc. Keep them occupied and they're happy as can be. Of course, I don't have your energy which is probably why it would be a bad idea for me to become a full-time mommy at 38!
August 18, 2009 at 7:51 PM