Yesterday I never woke up.

It was one of those days where your body refuses to awaken, but you have to get up all the same. I really didn't get a lot done (though my junk drawer now looks very pretty and organized and my laundry is sorted) and felt like I should have been sleeping the whole day through.

And then Jeffrey came home from work. He looked at me, and after a sweet embrace and an even sweeter kiss asked me to call his mother, I wasn't allowed to cook that night, he was taking me out.

We dropped Keith off with his grandparents and headed for My Love's favorite Chinese restaurant.

Orange cones and traffic jams can only mean one thing. Summer is still in full swing.

As we were driving I saw an old man holding and shaking at the passing cars the "SLOW" sign. He stood there in his orange vest in a cloud of concrete dust, his wild white hair blowing around his head giving him the look of a mystic.
I could just see him sitting in a lawn chair placed strategically in his perfectly manicured lawn, yelling at the noisy kids and shaking his fist at anyone going faster than 5 miles an hour. I could almost hear the raspy voice shouting "Slow down, you hooligans!" 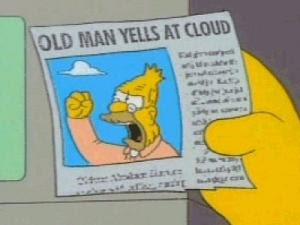 source
He looked rather out of place. I guess that is just more evidence of the hard times; when your neighborhood crank has to get a job. But at least it was doing something he is good at.
And though that was a completely pointless tangent, I thought others might like to laugh at it as well. Does that make me a bad person for laughing at old men shaking their SLOW signs at cars?

We got to the restaurant and I suddenly remembered. I don't like Chinese food. I never really have. But I figured out why, yesterday. I don't eat meat. I'm really not a fan of it. I just don't like how it feels in my mouth. There is virtually nothing on the menus without meat. Nothing! Deciding on something to eat is nigh impossible! However, I lucked out. I found something called Vegetable Foo Young and it is divine. 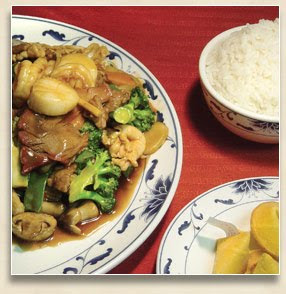 source
After Jeffrey was two bites into his meal, he began coveting mine. But we know that will always happen in restaurants. I think only once have we gone to a restaurant and ordered food and he hadn't wanted mine. Only once! I generally order for him now.

It was on Valentine's Day (actually the day after because I was sick on the actual day, so we celebrated a day late) and we went to a nice restaurant, not the typical greasy spoon or burger joint type that we normally frequent. I took one bite of my pine nut spaghetti and then convinced Jeffrey to trade me. By the end of the meal he was saying he wished he had ordered what I had ~ and the funny thing is, he had! He just forgot that he was eating my order. But I digress, again.

As we were eating our meal last night we had a wonderful show put on by the local law enforcement. Evidently something happened with a customer. Five, count 'em, five policemen came in to try and sort out the problem. We saw two of them wander into a back room, and the other three gathered around a woman and they all seemed to just be chatting. Jeffrey heard phrases like "and then he pulled out a knife" but no one seemed alarmed, and they were there during our whole visit! The local crime must have been down last night. Jeffrey thought they were hoping for some free food. I am inclined to believe him.

And that is why Jeffrey is so wonderful. I didn't even hint to him that I didn't want to cook dinner, I merely stated I was tired and my body felt like it hadn't quite awakened that whole day. And just like that, we got to have a wonderful dinner and a show. And that is why he is going to get a surprise pie soon. Because that is how it works. He surprises me with dinner on my low low days, I surprise him with a pie on his hard day.

I hope your day is fabulous! Mine is already so much better than yesterday!

What a cute story! And told so well.
Thanks for stopping by my blog. I look forward to getting to know you better.

Your Jeffrey is SO sweet. Will he come over and give lessons to my Gary??

i have never been a huge fan of chinese food either and the meat always is kinda rubbery or has a weird texture. we have a great chinese place nearby, abc mandarin, that i really enjoy though.

I think Nick and I usually like the food we order ourselves, unless we are at Cheesecake factory and then we both want each others food and our own. I love that you make pies for your hubby, it reminds me of Snow White.