June 30, 2009
When I was a kid there was a television station called "The Box." You could call in and request a music video to be played, and they would charge you $2.00. It was my only form of staying up with the cool people who had cable television, so I watched it whenever I could... just so I could sound cool, like I was up with the times, yo.

I remember a music video I really liked was Sabotage by The Beastie Boys.

I am reminded of that song today.

Keith and I decided we were going to have a clean house today. He was in on the agreement, and even had a few suggestions as to how we could decorate. I firmly vetoed decorating the living room with race cars, and he at last relented. We were agreed. So, he began playing quietly with some cars in the other room and I began cleaning.

I turned around to get the vacuum, and when I got back a sneaky little interior decorator had gotten into the house, and begun to design a new layout complete with cars and stuffed animals. I put all the decor away, and again sat down with Keith telling him he could decorate his room any way he liked, but we as a family had agreed to decorate the living room and kitchen in their current fashion.

He nodded his head, and went back to his toys. I began to vacuum and shortly thereafter stepped on a little wooden giraffe. I looked around and saw that Noah had been to visit, and decided to let all his animals out to stretch their legs and wreak havoc on my plans of a clean house.

I instantly demanded Noah take his animals and ark and go back to the toy shelf where he belongs. He was not very nice about it, but eventually I won. 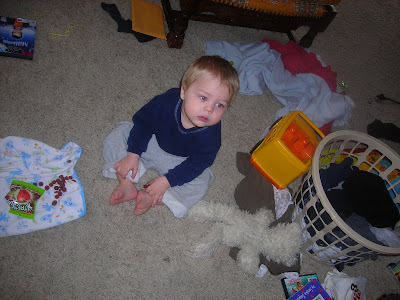 When I got over to Keith's study area, I was mortified to find a book eating monster had been by to visit. All the books had been thrown off their shelves and scattered haphazardly across the floor. I was nearly ready to give in and let Keith decorate the house after his own fashion when I spied it.

Hidden under the rubble of books, winking at me in the sunlight was my salvation. A blue pacifier and a shabby white leg. It was the binki and Mr. Bear. As if a message were sent to me from up above, I knew what to do. I snatched them up, offered them as a bribe to Senor Decorator. The minute he accepted I scooped him up, planted a big kiss on his squishy cheek, and deposited him in his bed.

Now, my living room is clean. Next step: The kitchen.

Noodle said…
I can only clean one room a day... So sense I cleaned my living room monday it was messy again by tuesday morning... Just in time for me to work on the kicthen... Oh well if you stop by and my house is a big toy mess just step lightly and enjoy the ride...
June 30, 2009 at 7:00 PM

Rhiannon Nicole said…
hehe how cute :) I can barely clean up after myself these days!! Happy Saturday Sharefes from SITS!! xo
July 25, 2009 at 8:30 AM