Sometimes people with it are.

A couple years back I lived in that great state of California and while there met a sweet old lady named Bea. Her whole world was in her head. She used to be a big shot in NY. She was CEO for a large corporation and very hot stuff. Gradually she lost her grasp on reality and the present, and so was sent to CA for some R&R. One of her children eventually put her in a home, and that is where I met her.

When I tried to talk to her, she would grab my arm in her tiny claw (with a steel grip) and say "I told you I needed those papers on my desk by Monday, Louise! What day is today?"

I would answer "Saturday." because we always visited her on Saturdays.

"Right! It's Wednesday and there are no papers here, are there? Do you want to keep your job or are you actually trying to get fired?"

She fascinated me. I have actually wanted to study Alzheimer's because of her.

Fast forward a few years and I find myself married to the most amazing man ever born, who has a sweet family, and the most adorable grandfather ever. I was warned that he has the dreaded Alzheimer's, so when I met him, I expected someone much like Bea.

Grandpa Melvin (isn't that a great name?) was helped into a chair, and left while everyone went to get food. Jeffrey and I found a couch near him and began talking to him. He is nothing like Bea. He knew where he was and why he was there, he just couldn't remember many of the people he sees every day. He had no idea who Jeffrey was, but that he knew that he should know him. The house was full of teenagers (due to the fact that it was a mission farewell) and Grandpa Melvin was greatly perplexed.

I asked him how his day had been and he said "Confusing! I can't remember who any of these people are! Are the all related to me?" 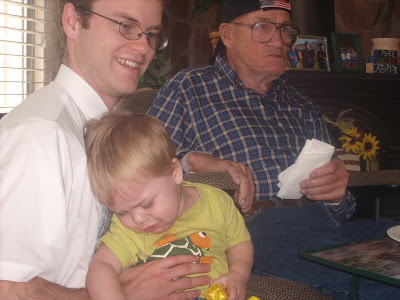 His daughter reminded him that he didn't know any of them, they were all strangers. He then commenced in talking about getting to know the neighbors and wanting to help them fix their roof. He could see through the window that it was in need of repair. Suddenly he stopped mid thought and said "What the heck have I got on my head!?"

He was wearing a baseball cap. 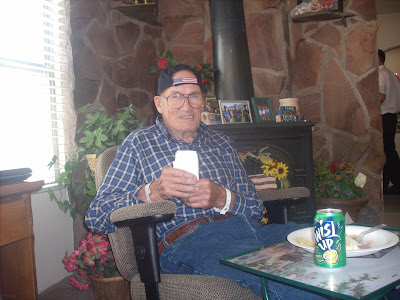 Grandpa is so jovial! He didn't really mind that he was losing his memories, and he actually made fun of himself for it . He played with Keith so adorably, and kept cracking jokes the whole time. I have not seen someone his age laugh as much as he did. Ever.

I love Grandpa Melvin. I wish we could see him more often. I know that he wouldn't know who we are, but he sure is good at making people laugh. We were told that the day before he had told one of the workers in the home where he is staying, that she was the most luscious woman on the planet! If only someone would say that about me. Well, Jeffrey turned to me and repeated his grandfather's words, but it didn't have the same effect, since I knew he was only repeating the wise words of his grandfather. 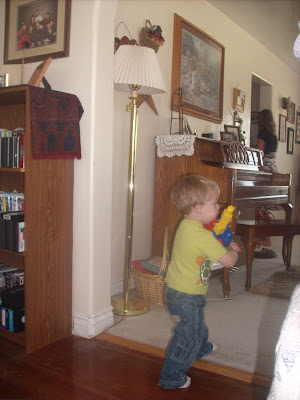 valentine said…
what a sweet story, i wish i had a grandpa like grandpa melvin. thanks for sharing this with us.

How cute is Jeff's grandpa!

Bea sounds like a riot, I want to hear more of your stories!

Amy said…
Valentine,
I wish you had a grandpa like him too. I wish i could have known him when he had more of a memory. Jeffrey said that a person's true character comes out when they have something like that. No inhibitions, if you know what I mean.

Emily,
No inhibitions, right? I think it would be fun to just let loose and be who you really want to be with no thought of offending, or saying or doing the wrong thing. I think it will be wonderful to grow old, but the best part for me will be the growing and the memories.

Sheryl,
Jeffrey's grandpa is a doll! Bea is hilarious, and I will try to find ways to share more stories. Most people tell me to shut up about them, but for you, I will share. Yes, Keith is quite the adorable little boy. He looks so big in that picture, I couldn't believe it either!
June 24, 2009 at 7:29 PM