In honor of the inauguration yesterday Jeffrey and I wanted to watch the movie Dave. Keith had already gone to bed, so we thought we would try to find it on the Internet.Jeffrey found a movie called Meet Dave starring Eddie Murphy. We ended up watching that movie instead. It is really weird. I think it is worth the watch if you are bored out of your mind and looking for something mildly entertaining. We laughed, but will probably never see it again. We were impressed with Eddie Murphy's acting abilities however.


My computer picture downloading capabilities was out yesterday so I never got my post published. Keith got a haircut. His hair was getting a little unruly and the mullet was becoming a little too much for me, so we pulled out the razor, put it on the longest setting we have, and cut it all off. He is military ready now. I sure liked his hair when it was a little longer, but what can you do? 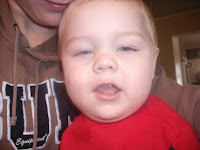 Also, I am painting my cupboards. They are a hideous shade of orangish brown right now, and so I am painting them brick red. I think it looks nice. I can't wait until it is finished, though. It will be so nice to have a kitchen that actually looks taken care of rather than a kitchen that looks thrown together. Oh the joys and hard work of fixing up a house. 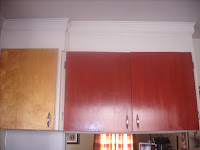 Fun with Jeff and Amy Keith

Capt'n Amazing's wife said…
Awesome! I want to have some hot and juicy red in my kitchen too! Sometime this year maybe I'll finalize the project!
January 21, 2009 at 2:06 PM