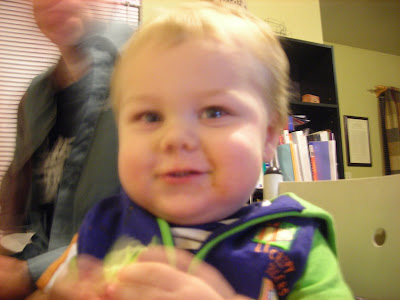 I am not saying that because I think he is better than anyone else, I am just stating the facts as I see them.

He fixed the computer.

Jeffrey got home from work and looked at it, and he didn't see anything wrong (when I say looked at it, what I really mean is glanced at it but didn't concern himself with it).

This morning my super smart son walked over to the computer, played with it for a second (I figured it was broken, so it wouldn't matter anyway, right?) and then pushed in the on button. It turned on.

I wish I was born with computer smarts. I still can't believe that my one year old child was able to fix the computer that neither I nor my hubby (the IT specialist) could fix... not that my hubby tried or anything, I just like saying that he couldn't. It makes Keith sound smarter.

Here's to the super smart generation... I guess now I know what it feels like when we can zip through computers and our parents or grandparents have to turn to us for help.

He is also the master of manipulation. He can get his parents to do anything for him. All he has to do is give us that cute little smile and hold his hands out as if he were a little beggar, and we just melt. He's just that smart.

*Sigh* well, there went all my confidence about being able to teach my son anything. He probably already knows his ABC's, heck, her probably really knows how to read. He "reads" books often enough, I am sure of it. He picks up real books, not just picture books and reads those. Sheesh! What a smart little boy I have.
Keith