December 08, 2008
I woke up this morning to singing. No, we didn't have early morning carolers, rather we had Keith sweetly singing in his room. I figured he wasn't super hungry, and his diaper wasn't bothering him too much, so maybe he would go back to sleep. After a thirty minute concert I decided it was time to get up. As I went into the kitchen to get him some milk, I had to suddenly stop. Outside my window in the early dawn I could see huge fat flakes lazily covering my grass and car. Snow! Now, Christmas season can officially begin. 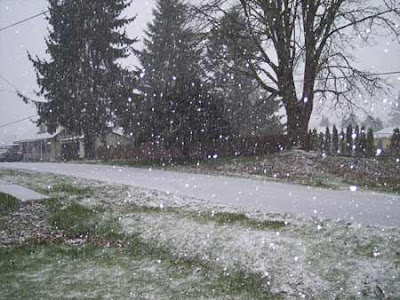 When Keith saw the snow, he stood on the couch laughing and pointing out the window until the flakes got so small he couldn't see them any longer. They were still there, but just small. All day long it has been snowing, and all day long I have been laundering and folding. I can now say with such joy in my heart... Christmas has officially started! Pull out the sleds and hot chocolate my friends, for "the most wonderful time of the year" has begun! I have been playing Christmas music in my house all day and dancing around to it. Keith just thinks I have lost my mind, as he points and laughs at me, but that's what Moms are for, right? to embarrass their kids?

I wish that photo were mine, but I was too lazy to take a picture today. So, I used this one that I found on Things That Make You Go Hmmm....
Keith Ramblings