All Holiday Tuckered Out

Today, I went Christmas shopping. The Boss came along with me because we are buds, and that is what we do. I tried to get him to take a nap before we went, but he knows what is best for himself, and he was sure to let me know that I was wrong. So, we went shopping.

After we stopped for a quick lunch we went to the great Going Out of Business at Mervyn's sale. It was great. They are selling their clothing racks, their display cases, everything! Basically all of the merchandise was gone, but when you can get a two table set for $75 total, you can't say no! By the time we were through with that store, I looked down in the conveniently provided cart and saw his eyes slowly opening and closing. He was done.

Since there were a few other shops I wanted to check out, I hefted him into my arms and started the long trek to the other end of the mall to find my store. They didn't have what I wanted. So, I turned around and headed back. I am not as fit as I once was. I had to sit down half way through the mall just to keep my arms attached to my body. For some reason, baby weight is so much heavier than any other kind of weight. I was exhausted. At that point I decided that he was going to have to walk the rest of the way, because let's face it, I am no Arnold Schwarzenegger.

To wake a sleeping baby. It seems to be such a simple thing. Say something a little too loud. Drop a pot. Close a door. All of these are proven to wake even the tiredest baby. But when you want to wake them, nothing works. I rubbed his back, sat him up, played with his super chubby cheeks, tickeld him, bounced him, blew in his ears, talked to him, put him on his feet only to watch him instantly crumple to the floor... I could not believe how much he was sleeping through, and what a mean mother I am to try to wake him when he is so tired. Finally, he opened his groggy little eyes and looked at me as if to say "I'm sleeping here, what is it you want?" I got him to walk 3 steps before he started howling to the world about how terrible I am for waking him, and he was going to show me. So, I carried him. He won. However, carrying baby who is awake compared to a baby who is asleep... I will take the awake one any day.

We wandered into the Quilted Bear because it was near where we parked. I set him down, and the wailing and head burrying into my knees instantly started. We walked toward the back of the store where he saw a stuffed dog. Finally, salvation! He instantly picked it up and sat on the floor grinning like a mad man at me. I colapsed next to him and together we enjoyed the comfort of the dog.

Finally after a few more stops and heartbrakes on his part whenever I would set him down, we made it home. I don't know how some mothers do it, but shopping with kids is exhausting! I laid The Boss in his crib and took a picture. Normally when he sees a camera he runs towards it with outstretched hands, ready to push buttons and take many self portraits. This tims, he just lay there, looking up at me through half closed eyes. 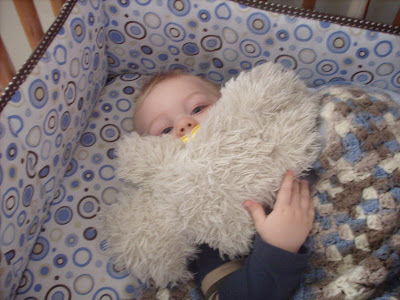 So, am I a mean mom, or am I just really smart. He is now going to sleep for a long time, which will give me a chance to get caught up on some things that I have placed on the back burner for way too long. The verdict is out.
at December 17, 2008

Email ThisBlogThis!Share to TwitterShare to FacebookShare to Pinterest
Labels: Keith

All I can say is cherish and relish those naps. My oldest napped until almost kindergarten. My second stopped napping at 18 months. Well - she would still nap, but then she couldn't sleep until 11:00+ pm, so we stopped the naps. Naps keep mommies sane!

My mom told me Mervyn's was going out of business and I thought she was joking at first *L* I'd say you're just a smart mom, not a mean one ;)

I too have done the long walk through the mall carrying a heavy child. :( I feel your pain.