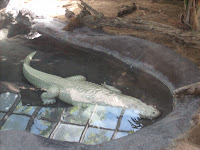 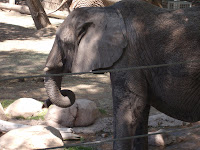 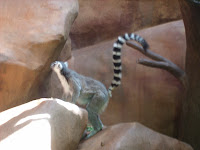 I am really late at posting this, but I had to say something about it. My Love and I were talking last Monday about something or other and he mentioned the ostrich. I told him I had never seen a live one, and he was shocked. We then discussed the 2 times I have ever been to the zoo (that I can remember) and decided that it was time to go again. So, I was super excited to take The Boss, because he loves animals, and I was going to take a lot of pictures and it would be so much fun... and I got maybe 5 pics, so... there went that plan. It was a lot of fun, and I really enjoyed going. It wasn't too hot (except in the bug house.. I didn't think I had a problem with bugs, but I really do. I just don't like them), and there were very few people there, and my mother in law, sister in law and her two little girls came with us. Wow, what fun the zoo is! I think it will be a lot more fun the next time when The Boss can actually enjoy it a little more. He was a little disgruntled by the restrictions of his stroller, and by the lack of a nap that he got. Oh well, we will show him pictures when he is older and tell him how much fun he had (nothing like parental brainwashing).
Just for fun