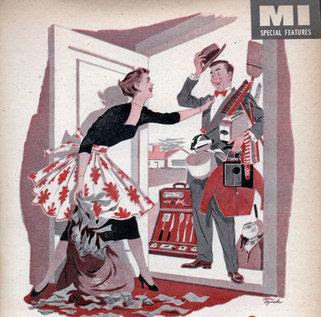 So today I was on my way out the door to get some formula which was in the car when 2 salesmen came walking up the step. They told me that if they win the "contest" of who can get the most people signed up for a magazine, then they will be flown anywhere in the world for a vacation, all expenses paid. I was asked if I had that chance, where would I go? I was a little annoyed with them because I could hear The Boss starting to fuss, and I needed to get some food for him, so I said "The Isle of Man" full well knowing that they had no idea where that was. I was right, and when they asked me, I said it is an island off the coast of Ireland. He said that he would go to Italy, because that is where his family is from, and we could be shopping buddies because Italy is right next to Ireland. I was a little amazed at how little he knew about geography, but didn't say anything. He kept trying to sell to me, so I told him he had better talk to my husband, I was a little busy. He ignored what I said, and kept on talking. He asked if we took any magazines, and I said yes, and so he tried to find it on his little magazine sheet. I told him it wasn't there, because it is a church magazine, and he asked which one. I told him the Ensign, and that was the only magazine we took. He looked at me for a second, and then said (voice full of dirision) "Oh, you're Mormon then." He then started talking again, trying to get us to buy some magazines for a hospital, because sick or dying people need magazines more than they need medicine and professional help. So long as they are entertained... My Love came to the door then, because he could hear me talking to someone. I handed him the flier, and ran to the car, because The Boss was getting a little more adamant. When I turned around, they were walking away angrily. I asked why they weren't talking to My Love, and they said it was because he didn't know what they were talking about (because it would have been way to hard to give him the 30 second intro they had given me) and they stalked off. I am just saying all this because My Love thought it was such a funny story, and he wants it remembered. I was a little annoyed, but no worries. I got rid of them because The Boss needed me. How great it is to have the baby for an excuse. Yay Mr. Boss-man!
Fun with Jeff and Amy

Mare said…
Just so you know, after the hospital schpill, they then move to the soldiers over seas. I asked them about consumer reports and Runner's world - they don't have them. Finally, if that doesn't work, ask them about Readers' Digest. Their subscription is around $60. Then talk about the offer to re-renew that you just received from RD for $12 (which I did) and ask them where that $50 difference goes, and if THEY would buy from them in this scenario... sort of takes the wind right out of their sails...
May 6, 2008 at 11:28 PM

Tawni said…
Hi Amy! My mom said she saw you yesterday - of course I know who you are! Sorry if I was a little snotty in high school. I was just shy. :)

Anyways, I saw your blog on Tricia (Ferrell) Swenson's blog just in case you're wondering. I have one too! I admit I have become a blog addict.